Allan Jones tips the bucket on a sneaky clause in the Federal Budget allowing Arab money to enter Australia to buy public infrastructure and get a big tax deduction on profits. This is the result of Liberal and Labor free marketing and deregulation and Australia loses its last vestige of sovereignty. Following Sharia finance is Sharia law.

AUSTRALIANS WILL NOT COP SHARIA LAW

5 April 2016 The Federal Member for Kennedy, Bob Katter thanks Alan Jones for throwing his support behind the workers of Queensland Nickel (QNI).

“We welcome the news that Alan Jones will be coming up to chair the meeting,” said Mr Katter.

This is the first meeting organised by the workers. It will be held at 1:45PM, Monday, 11 April at The Ville Casino in Townsville.

Mr Katter has called on the State and Federal governments, business leaders and the workers to assert themselves at the meeting:

“Workers need to demand a worker’s buy-out or some other approach to get QNI reopened,” said Mr Katter.

“The business leadership in Townsville must step forward and organise a prominent business group to provide comfort for a government coming in with a guaranteed loans scheme and discomfort for any of the politicians not backing a buy-out scheme.”

“There must be action from the State ALP members and the Federal LNP and Senators to help us here. I’ll be the first to encourage and applaud them if they step forward and fight for their people. Come on fellas!”

“When you’ve got 2000 families in the electorate staring down the gun barrel of bankruptcy or near bankruptcy, it is your responsibility to get off your tailbone and do something about it.”

Mr Katter said this meeting is an opportunity for the workers to say what they want:

“There were 40 or 50 of the workers at the leadership meeting that I attended and I saw in them a determination in them to fight.”

“Fellas, ladies we can win this. But we can only win this as a community who stands up and fights.”

“The first people who need to stand up are the workers and I would plead on bended knees to a quarter of those workers who I represent, and to the concerned people of the town to attend Monday’s meeting.” 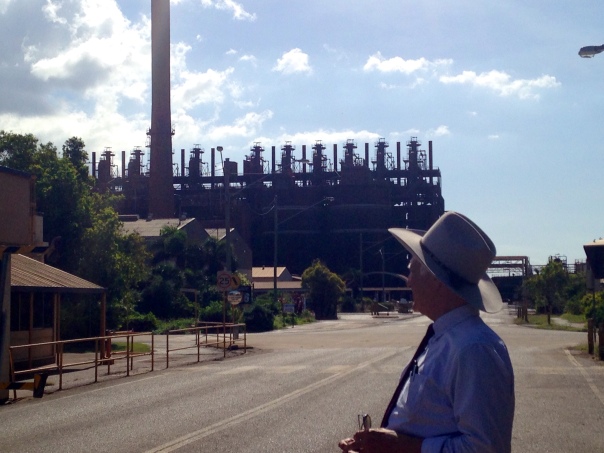 Lord Monckton predicted Turnbull would give Australia to United Nations

When Sir David King, the scientifically illiterate chemist who is the climate change ambassador for the united kingdom lobbying the world nations to vote yes at the Paris UN conference in December 2015, was asked by the environmentalist committee of the House of Commons in May 2015, “…if all the nations of the world in principal were ready to sign their peoples rights away to such a treaty”.  He replied: “Oh yes but there are two stand outs, one is Canada, but don’t worry about Canada they have an election in the spring of 2015 and we and the UN will make sure the present government is removed but Australia we can do nothing about because Tony Abbott is in office until after the 2015 conference”.

Lord Monckton said: “All Australians need to guard Tony Abbott’s back for the Turnbull faction, in conjunction with the UN, will be doing their level best to remover your elected Prime Minister from office and in particular before the December 2015 UN conference in Paris for they do not want any stand outs at the conference with the only one at the moment being Australia … God bless Australia.”

Lord Monckton’s warning of Malcolm Turnbull’s push on Tony Abbott was correct being the first part of the UN plan. The October 19th 2015 result of the Canadian general election will watched with interest if the last move of the plot by Sir David King comes to fruition, allocating world power to the chosen few.

Your complacency is working, government media control is working and there is nothing in the press about Australia being handed to the United Nations by public servants.

Tomorrow in the USA Australia will be voting on the 17 Goals the United Nations want implemented by 2030. Read our story [HERE].

Enjoy now what you have for the new owners have other ideas with their New World Order.

Alan Jones has echoed the millions of comments on social media stating the Islamic scourge is mostly opportunism by people wanting to bludge off the west. He says 73 per cent of this tide are men. He wants to know why these fit young men are not staying in whatever country they come from to fight the Islamic lunatics. Like the majority of social media comments, Jones thinks these battalions are fifth columnists ready to take over Europe once they are settled. He is correct and the bleeding heart Labor, Green and Liberals want these bastards in Australia. My grandfather fought in France 1914-1918.

He would roll over in his grave along with my uncle who was awarded the MM fighting the yellow peril of 1943 in the Pacific Islands. This is reality and we are again facing it all over the globe. Who will pay to host these fifth columnists in Australia?

Listen to the end of this audio program.

Bob Katter, KAP Member for Dalrymple Shane Knuth, Alan Jones and Robbie Katter tell the Liberal and National Parties they have had enough!

THE LAST STAND IN WINTON: WE WANT A RECONSTRUCTION BOARD

5 December 2014: KAP Leader and Federal Member for Kennedy Bob Katter said today that the ‘The Last Stand in Winton’ – the Rural Debt Crisis Summit was unanimous in its determination to seek a reconstruction debt approach to farm debt.

Approximately 400 people including leading economists, politicians, Government Ministers and farmers from around Australia attended the Summit called by the State Member for Mount Isa, Rob Katter.

Radio Presenter Alan Jones was the guest speaker who promised he would be delivering the message from the bush to the people in the cities and the politicians in Canberra and the capital cities. Mr Jones received a rousing standing ovation from the audience who he told to ‘put their shoulders square and fight’.

“To reconstruct the bad end of that debt is achievable by Government and they need to move in immediately in a situation where the banks are foreclosing at a rate of 10 properties per week.

“Banks do not just foreclose, they’re using duress and even mis-representation to get people to agree to terms without putting them into receivership.”

The meeting also called for a moratorium on all bank foreclosures until the drought ends.

Farmers spoke from the floor to give heart-breaking accounts of their farms being sold up after generations on the land.

A Winton Rural Crisis Committee will now be established to take forward the outcomes of the meeting.

The resolutions agreed to at the meeting are:

Drought and other natural disasters

3) That the new approach support stressed agricultural businesses by providing:

· Greater certainty as to the availability of assistance

· A form similar to the previous QRAA model, and

4) That governments increase the number of Rural Financial Counselling and other support services in the state of Qld and place them appropriately around the state.

5) That Australian farmer incomes and profitability be made central to government policies, including in a reworking of the inadequate Agriculture Green Paper

9) That interest rates are excessive and incompatible with sustainable production, industry profitability and international competitiveness. The Federal Government to work towards reducing interest rates.

10) That the Australian dollar is un-competitively high and calls on the federal government and the Reserve Bank to put in place methods to compensate Australian industries and reduce the dollar.

Politically-correct socialist brigade will one day become victims too

KAP Federal Member for Kennedy Bob Katter has warned the politically correct brigade that they will also be victims of the “intolerance tiger that has been let out of the cage” over the withdrawal of advertising on Alan Jones’ (pictured) radio program due to ‘cyber-bullying’.

“These people better wake up and realise what they’re doing is a blatant intrusion and transgression of freedom of expression,” said Mr Katter.

“Journalists and media commentators have the right, just like everyone, to put their point of view.

“And I used to write letters of complaint when I was a member of the LNP about Philip Adams – who had a different approach to Alan but was unashamedly and unapologetically pro-socialist and pro-ALP.

“But when corporations start cutting off advertising because of pressure groups on some enormously spurious claim, we have a most serious problem indeed. And the advertisers need to be reviewing their position here.”

Mr Katter said while he violently disagreed with Prime Minister Julia Gillard on how Australia should be run, he had always got along with her on a personal basis and would never wish her any harm.

“But Alan Jones’ comments were simply a classic case of someone letting their mouth run… and I think every Australian in the past fortnight would be guilty of some excessive comment or hyperbole that, in keeping with good Christian principles, they would be ashamed of.

“But as for vilifying a person or taking away his freedom of expression, it’s easy to see who the truly intolerant people in our society are: it is surely the politically-correct brigade.

“And now even some of the violin-playing hand-wringers are starting to become embarrassed,

because it’s Alan Jones today and it will be them tomorrow, once the intolerance starts and the freedom of speech stops.

“What is happening here is un-Australian. The intolerance tiger has been let of the cage and it will maul left and right – and also those of us in the middle.”