The Queensland Government has been accused of exposing voters to a massive security breach by allowing Chinese-based coders to write critical software for the Queensland Electoral Commission.

While Australia and the United States kicked out the Chinese Huawei IT company, brainless state Labor Party politicians expose the entire voting population to identity theft, bank fraud, and every other aspect of corruption the communists can dream up by allowing China in.

Sky News presenter Peta Credlin dropped the IT bomb on Friday claiming the outsourcing of coding gives China access to the electoral roll and 2,826,613 names, addresses and dates of birth of Queensland residents.

It could make accusations of Russian meddling in the 2016 United States election look like a Facebook discussion.

China effectively could manipulate the result of the upcoming state election, which should raise the hackles of the unions and Deep State operatives within the QEC.

Pauline Hanson lost the state seat of Lockyer at the 2015 state election due to fraudulent postal votes.

For decades the unions have been instrumental in large scale voting manipulation, aided and abetted by QEC sleepers, which has changed the result in marginal seats.

Postal voting is the latest method of voting fraud as Pauline Hanson could attest when she narrowly lost the seat of Lockyer in 2015 by a handful of suspected fraudulent postal votes.

Channel 9 reported on the election:

“One Nation’s Pauline Hanson is having a bigger than expected impact in the seat of Lockyer.

Sitting LNP Ian Rickuss was ahead with 8596 (33.65 percent), but had suffered a significant swing against him.

The two-candidate preferred breakdown on the Queensland Electoral Commission website has Ms Hanson ahead with 54.6 per cent compared to Mr Rikuss’ 45.3, but that figure is based on only five of the 61 booths.

ABC’s election analyst said Ms Hanson is leading on a swing of 18 per cent in those five booths.”

This went on until the counting finished causing Ms Hanson to lose the race.

The Queensland Marxist government like Premier “Red” Dan Andrews in Victoria, bows and scrapes to China but there is only so much people can take.

Voters will not get a clean election result until the state government orders a physical habitation check of every Queensland household to be undertaken by interstate, independent inspectors and overseen by a retired interstate judge.

There is a full page advertisement in some newspapers from the Liberal Party asking for candidates to contest the state seats of Cook and Hill.(west of Cairns)

It never ceases to amaze me when we keep getting Labor candidates re-elected in Cook.  At least five conservative political parties I have discovered are going to put their hands up to run against Cynthia Lui the indigenous Labor member on October 31.

Not all of them can be serious about winning the seat. There is a large welfare vote in the northern part of Cook which favours the sitting member.

But conservative voters outnumber the Labor voters. If the LNP, KAP, One Nation, Palmer and NQ First all nominate candidates they split the vote five ways and Labor gets returned.

I have my suspicions that most of these parties know they can’t win and are just chasing the money. Why not when the Labor Government recently doubled the value of your vote to candidates and parties which get over 4 per cent of the tally?

Payments to candidates standing for election will increase from $1.57 per vote received to $3.

Payments to political parties will also increase, from $3.14 to $6 per vote received.

The eligibility threshold for the payments has also changed — parties and candidates will only require 4 per cent of the primary vote, rather than 6 per cent, to receive the money.

It would be a good question to ask. Where does the money come from?

It is up to voters to determine which candidate is serious about winning and working for the local community instead of chasing the money. My test is who is a local and will live in the seat, how many MP’s do they have in the nearby region and their past performance and who champions regional communities, farmers and small businesses of the Far North?

It is not hard to find an answer.

Editor: Cairnsnews editorial board has agreed to publish letters from North Queensland readers relating to the upcoming state election. Particularly like this one which the writer said Newscorp and other press would not publish. Send in your unpublished letter and we will print it if it has merit. We will publish the identity of the newspapers that refuse to publish well written letters with topical subjects. 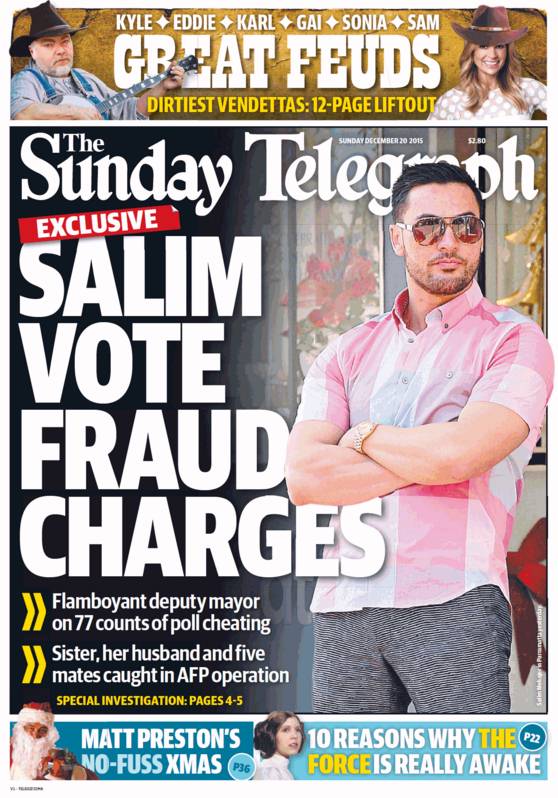 HIGH-profile deputy mayor Salim Mehajer has been charged with forging documents to rig the 2012 ­Auburn Council ballot that got him elected.

An Australian Federal Police ­investigation has also charged ­Mehajer’s sister Fatima, his brother-in-law Jamal Elkheir and five other associates and school friends who ran as candidates in the council poll.

The Mehajer siblings are ­accused of forging documents, a crime that carries a maximum penalty of 10 years in prison.

The rest of the group is charged with falsifying their candidate information sheets to claim they resided at addresses in Auburn, making them eligible to run.

The deputy mayor first came to the attention of the wider public ­earlier this year when his wedding, featuring helicopters, sports cars and a military flyover, all being filmed by a professional movie crew, brought parts of Sydney to a standstill.

However, the AFP has been watching Mehajer since 2012, when officials at the Australian Electoral Commission noticed a large number of online and postal applications in the weeks leading up to the poll from people requesting to change their ­enrolment address to Auburn Council’s first ward, where he was standing as a candidate.

Further checks allegedly ­revealed that several dozen of the online applications had been submitted from a computer located at the Mehajer family’s home and another at their business address.

When AFP officers later raided Mehajer’s property at Lidcombe they located a printer that appeared to have the same security identifier as some posted application forms.

Phones were also seized that ­revealed text messages allegedly ­relating to the suspicious applications sent to the AEC.

A second part of the investigation focused on Mehajer’s close associates, who ran with him and his sister as group independent candidates.

Scrutiny of their candidate information sheets revealed they had been falsified to say they lived in ­Auburn, allowing them to run in the ballot as part of a group, police claim.

As the head candidates of their ­respective groups, both Mehajer and his sister were given a box “above the line” on the ballot paper, putting them in a favourable position to earn votes. The vast majority of voters at that year’s council election — 77 per cent — voted by ticking a box above the line, according to AEC data.

While Fatima Mehajer was ­unsuccessful, her brother was elected to the fifth and final spot on council by more than 500 votes.

The brief of evidence for the investigation was served on the DPP for assessment in February, several months before ­Mehajer shot to ­notoriety with his lavish wedding.

The investigation, which has been running since August 2012, culminated with court notices being served on all eight people on December 9 and 10.

The others have been named as Jamal Elkheir, Fatima Kandil, Shi Lao, Abhinav Mehta, Arjun Mehta and Ahmad Trad.

“All eight are scheduled to appear in the Downing Centre on 2nd February,” an AFP spokeswoman said.

The Mehajers have each been charged with 76 counts of using forged documents and one each of using false or misleading documents.

The remaining six people have been charged with one count each of using false or misleading documents.

Mehajer responded to the allegations last night on behalf of his sister and his brother-in-law, saying the charges were false and motivated by a hidden agenda.

“Allegations will continue to grow in anticipation to tarnish us however, this will not in any way, shape or form, threaten us to step down,” he said.

“They are false and misleading with hidden agendas to bring us down. We shall remain focused on our roles and responsibilities.”

“It’s all a political game ” he told The Daily Telegraph

Eleven candidates ran across two groups in Auburn Council’s first and second ward. Group H was led by Salim Mehajer and had a total of six candidates running in the first ward.

Group G was led by Fatima Mehajer and had a total of five candidates running in the second ward.

Of these 11 candidates, eight were closely known to each other and have each been charged by the AFP.

Jamal Elkheir –  Fatima’s husband, who ran beneath her in Group G in the 2012 Auburn Council election. He is Charged with producing false or misleading document.

Now the AFP have proven to be effective with election fraud investigation, can we expect this to continue into federal government election fraud?

Strictly speaking, and barring some rare, isolated cases, there is no electoral fraud in Australia if by that one means ‘illegal interference with an election process’. None of the defining instances of ‘electoral fraud’ is present in Australia — not intimidation, vote buying, misinformation, misleading or confusing ballot papers, ballot stuffing, mis-recording of votes, one million or more bogus names on rolls, compulsory voting, destruction or wrongful invalidation of ballots. And pigs are flying. It is ‘the electoral process’ itself which is fraudulent by engineered legislation to maintain the two party preferred duopoly.

Without doubt this commentary on vote fraud by the AEC is compulsory viewing. Mark Aldridge could be described as a perennial political candidate nevertheless his hard hitting expose of both major parties reveals their depth depth of fraud. The AEC, finally after recent events in West Australia and comments by Clive Palmer, Member for Fairfax show conclusively the department riddled with massive corruption and collusion.

Having attempted to find justice he has been denied it due to stacked courts. In his never ending pursuit of a peoples government to replace the two party controlled parliament, Mark reflects factual evidence to viewers naming the crooks and the crooked deals he has uncovered.