← LNP/ALP in Queensland ban pocket knives
LNP says it will sell rail, water and power-Newman wants a mandate at election → 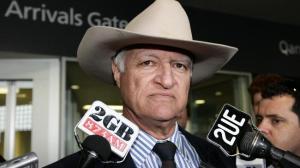 An application has been made to the Supreme Court to have the Katter name reinstated.

As a result Katters Australian Party was registered by the Commission.

The Electoral Commissioner David Kerslake, insiders claim, in collusion with the Australian Labor Party, decided to drop the Katter name from ballot papers.

Two weeks ago, Katter said he was coming after the two party duopoly. The ALP Premier Anna Bligh, the LNPs non-parliamentary leader Campbell Newman and their big-end -of- town controllers are terrified.

The QEC works closely with the Australian Electoral Commission and the QEC uses the AEC electoral roll.

Well known crime writer Bob Bottom OAM, of Bribie Island north of Brisbane has long condemned the QEC for its close ties to the Labor Party and for producing dodgy election results.

Last year the Courier Mail newspaper reported how a Queensland Union hacked into the electoral commissions data bank to alter the results of a QEC managed union election.

Democracy in Queensland is a complete sham and election results since 1987 have rarely reflected the intentions of voters. The two-party preferred result is another QEC scam that electoral returning officers apply when counting preferences.

The returning officer gets his instructions from a sealed envelope issued to all polling booths from none other than the Governments man, Electoral Commissioner David Kerslake.

No doubt when KAP gets control of the Queensland Parliament, provided the voting scams allow it, the Electoral Commission will be the first department to get the cleaners put through it.

← LNP/ALP in Queensland ban pocket knives
LNP says it will sell rail, water and power-Newman wants a mandate at election →