Qld Premier should be stood down for breaking the law

State KAP Leader Robbie Katter has called on the Queensland Attorney-General to refer Premier Annastacia Palaszczuk to the Director of Public Prosecutions over her sacking of KAP staff last month.

Mr Katter’s calls preceded news that Labor had this week used its numbers in Parliament to vote down an LNP motion that would see a special committee established to investigate the Premier’s behaviour.

Mr Katter said the objectivity of the Ethics Committee that the Premier had been referred to had huge questions around it. 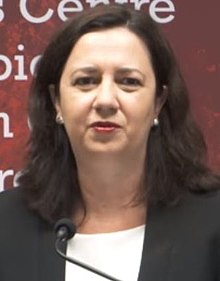 “Both major parties are compromised in this process, but particularly the Labor Party as each Labor MP on the Committee will be investigating their boss,” Mr Katter said.

“We’d be naïve to think that they won’t have that in the back of their mind when making recommendations.

“It’s vitally important that the Ethics Committee seeks impartial and independent advice from experts about the case.

“The CCC has said the Premier has breached the Criminal Code – if that doesn’t require significant punishment under our parliamentary standards I don’t know what does.”

A report handed down by the Queensland Crime and Corruption Commission on September 27 found there was “prime facie” evidence the Premier had breached the Criminal Code by using the funding she had granted the KAP as leverage to influence the minor party.

Mr Katter said there was now great public pressure on the government to uphold the integrity of the Queensland Parliament, and that it was vital for the Attorney-General Yvette D’Ath to step in.

“The Director of Public Prosecutions has two tests to consider when taking on a prosecution,” he said.

“1. Is there sufficient evidence? The head of the CCC has said that there is a prima facie breach of the Criminal Code.

Mr Katter said he was astounded by the fact the Premier had refused to stand aside while the matter was being investigated.

“We all make mistakes and we all must be held accountable for those mistakes; if the same level of standards were being applied to the Premier now as she had applied to some of those in her Cabinet, she would have stood down,” he said.

“To me, that refusal is the height of arrogance and suggests that in our Parliament, some people can get away with things while others can’t.

“Unfortunately for the State Government, I don’t think Queenslanders are very accepting of that sentiment.”