← Turnbull turns the tables on PM Abbott
WHERE IN THE UNIVERSE IS THIS AUSTRALIA ? → 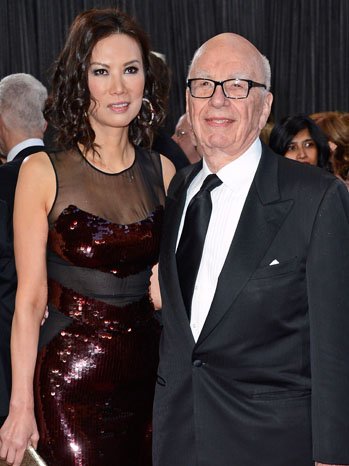 Rupert Murdoch, a naturalised American, with his ex-wife Wendi Deng

What happened last night with the overthrow of Abbott and installation of the jew Turnbull, was spelled out when Rupert Murdoch claimed that Australia was ungovernable just a few weeks ago. Clearly, Abbott, notwithstanding his Rothschild indoctrination (Rhodes scholar) was not performing as demanded, hence the comments of the Rothschild puppetmaster for Australia, Murdoch.

Now we have total jew control so hang on Christians, your ways will be decimated. We will be filled with same-sex marriage, republic and more Russian hatred. They cannot stand the fact that, after the jew communist takeover of Russia and the years of persecution and murder of Christians, Vladimir Putin and his Government have made Russia into the leading, perhaps only Christian country in the world. Certainly the only country showing any truth and morality. Those of us who seek freedom had better start learning Russian.

Do not give up the Christian ideals on which Australia was formed. Just remember that, what they call the government in Canberra is nothing but a private, United States registered corporation that has usurped power. If we all awoke, we could have them removed in a few days and revert to our Commonwealth Constitution.

← Turnbull turns the tables on PM Abbott
WHERE IN THE UNIVERSE IS THIS AUSTRALIA ? →