Welcome news from the Liberal and Labor church of free trade – Adam Smith would be proud of Mr Turnbull, Mr Shorten and their Uruguay DOFAT mandarins

Today the Queensland Government has confirmed White Spot virus has been found in wild prawns in Moreton Bay off Brisbane and now cannot be stopped.

KAP Member for Kennedy, Bob Katter said, “I congratulate the Government of the Australia with their Free Trade policies and no quarantine.

“Our prawn industry has been sacrificed on the altar of Free Trade. 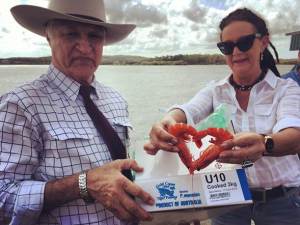 The sacrificial altar of free trade, a policy of the LNP and ALP, has killed off the Queensland farmed and wild prawn industry. Katter warns it will eventually decimate Far North Qld wild stocks and farms

“Not only all our industries have been exported overseas, and our jobs exported overseas but you’ve imported workers from overseas, which has been a cancer upon our pay and conditions and job opportunities in Australia  — but now you’ve succeeded in destroying our oceans.

“Because the currents flow north, White Spot will now be taken up the Qld coast and infect the Great Barrier Reef.

“This was done with eyes wide open.

“Every single person associated with the prawn industry and every scientist who ever looked at this knew if you brought the prawns in, you’d bring the White Spot in… and the IHHNV and heaven only knows which hundreds of other diseases we haven’t identified…and these damn people in Canberra run around talking about our clean green image,” said Mr Katter.

The Australian Prawn Farmers Association (APFA) President Matt West owns a prawn farm in the Mackay region. In a media report from January this year, Mr West says although his stock are some distance from the Sth East Qld region damaged by the outbreak, the disease can spread rapidly, “especially if it gets hold in the wild”.