Remembering Larry Pickdering by Paul Zanetti is a Walkley award winning syndicated cartoonist with over 30 years in the media. He blogs at www.zanettisview.com

Family and friends gathered on the Gold Coast to hear, and tell, yarns of the larrikin we all knew and loved.

Lifelong mate, John Singleton, delivered the eulogy by video (he flew up from Sydney to see Larry days before he checked out). Singo’s memories will be shared on this site in the next couple of days.

Larry Olsen, who goes way back to Larry’s horse training days, and spent a gazillion hours playing golf with Larry, got lost in time keeping the service amused with tales of his great friend.

Two of Larry’s sons, (Little) Larry and Ben spoke of their dad. There wasn’t a dry eye in the joint.

Larry’s family also asked me to say a few words (posted below). We were limited by time constraints, so I kept my memories to my first meeting with Larry. I could fill a book.

The service was filled laughter and tears.

And song, with a brilliant tribute, Ode To Larry Pickering, by Steve Mannix (coming soon).

Following these memories is a short video by Larry’s daughter, Steph, who picked a few public and private photos of Larry taken over his incredible life.

I remember clearly when I first discovered Larry Pickering.

Gough Whitlam was Prime Minister, making one hell of a mess of the country with his Ministry of Misfits.

And there – in the Sydney Morning Herald – jumping from the pages were these hilariously outrageous, beautifully drawn cartoons making sense of the lunacy that was the political theatre of the day.

So he was the perfect antidote to Whitlam.

Larry was brilliantly funny and clever – drawing Whitlam as a chook.

Poor old Gough became so beaten up by his own policies that Larry drew Whitlam with band aids on his face.

Naturally enough when Larry drew his calendars, the band aids were strategically positioned – including on his….donger, as Larry would eloquently explain.

Whitlam was furious and sued Larry for implying that by portraying Gough with a band aid on his donger, Gough had a sexually transmitted disease.

In his defence, Larry said that Gough would need to drop his dacks in the court room to prove that he didn’t have a band aid on his donger.

Gough didn’t drop his dacks but he did drop the law suit.

The publicity sold another estimated 100,000 calendars.

Whether he realised it or not, Pickering was a pioneer, blazing a trail for a new generation of cartoonists.

I cut out his cartoons from the Herald and The Australian and glued them in a scrapbook. My late mate Bill Leak told me he stuck Larry’s cartoons on his bedroom walls.

My own connection to Larry goes back to my 16th birthday. It was 1977 and Larry was in his prime as a cartoonist.

I’m from a large Italian family of six boys. We lived in Wollongong, an hour south of Sydney.

For my birthday, my mum planned a trip to Sydney.

I got to choose where we would spend the day – The Zoo….or Bondi Beach…or Luna Park…my choice.

But I had other ideas.

“I want to meet Larry Pickering,” the 16 year-old me blurted out without hesitation.

So off we rode in the family wagon on our quest to find Larry.

When we arrived at the News Ltd Surry Hills building around 10:30am, we just assumed that:

·1) Larry Pickering would be there

· 2) He would allow a big Italian family to just march into his office without an appointment.

And yes, he was there.

The Brady Bunch-sized Zanetti family crammed into Larry’s office while I fired off a million questions.

At the time Larry Pickering was a household name, appearing in TV ads for Dulux Paints – and a regularly on talk shows and Blankety Blanks. He was a cartooning superstar.

He patiently answered all my questions – and gave me the best present I ever had, a personally signed caricature.

“Who’s your favourite character, chief?” he asked me.

“I love your John Gorton.” I replied.

And quick-as-a-flash, he picked up a box cutter and sliced off a sheet of light drawing cardboard, grabbed a pen, while I watched enthralled as he magically waved his hand around the paper.

He finished off Gorton’s caricature with the ubiquitous flies that dotted his crumpled face- then signed it, ‘Happy Birthday, Paul. Larry Pickering’.

I had it framed and it hung above my bedhead until I left home at 18.

Larry asked me to send him some of my work.

He wrote back a two line letter that changed the course of my life.

“Your work shows tremendous promise. It’s up to you how long you stick to it.”

That was all the fuel an aspiring kid needed.

If there wasn’t a real Larry Pickering, then Banjo Patterson, Norman Lindsay or Henry Lawson would have had to invent him…the quintessential Australian character that embodied everything that is the Aussie larrikin.

Larry Pickering lived multiple lives, each to their fullest.

Above all, Larry Pickering loved this country – the best country in the world.

He was a patriot who, through his work, fought to preserve its freedoms and values.

Richard Swift,is a CPO (Commonwealth Public Official) has been arrested under NO CHARGES in Western Australia and is being held in the orientation unit Hakea Prison as Mike explains the situation on this podcast.

Time to put the pressure on this unaccountable WA government endemic corrupt system and phone the prison (08) 93666333, introduce yourself  – “I am a human rights observer seeking a wellness check on Richard Swift being held under duress”. Lets flood the prison with calls of concern and get Richard out.

Harry Palmer introduces a great patriot song you all need to hear. Harry and Mike continue their “OZ-CHAT” weekly program that smarts the eyes of our Establishment masters who do not control this media to the people. They discuss the solitary confinement of Phil Galea in a Victoria jail held in solitary confinement with no charges laid for speaking against their agenda to dictate. The burning of Christian churches in Australia by Muslims to then erect Mosques, and more …

Harry introduces Len McGuire a contributing journalist for years with Harry on SOSNEWS now part of the APRadio team. Len discusses the ABC Islam agenda in north Queensland, the sweeping move of QLD voters away from the duopoly gathering momentum daily as ALP and LNP continue to self destruct while Bob Katter’s KAP take a considerable lead in the polls.

Rod Culleton speaks on how the High Court dismissed his affidavit before the case began due to Parliament privilege act paving the way for Rod, along with other recently dismissed members of parliament, able to call parliament to accountability under their own rules they attempted to hand to the High Court that clearly lies within the Australian parliament jurisdiction which Rod has been trying achieve since his illegal dismissal from the Senate.

Harry Palmer- Features in today’s APRadio podcast the China takeover of our now gone manufacturing, expertise in industry and now take our money to purchase the food and goods we once manufactured.. Harry and Mike discuss the Turnbull $444million to the Great Barrie Reef cartel patroned by his wife Lucy with a crooked merchant banker… They cover the ADF now in the pink-  a laugh at association of Turnbull with Shorten in a pub together…..

Listen to this podcast [HERE] 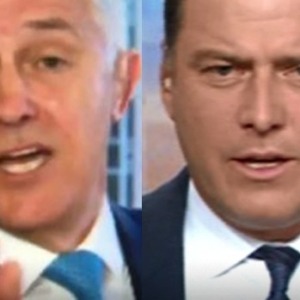 Prime Minister Malcolm Turnbull is in the fight of his life trying to justify his fraudulent awarding of a $444 million grant to the Liberal Party aligned and mining industry backed Great Barrier Reef Foundation. Nine’s Karl Stefanovic has come to Turnbull’s defence on Twitter defending the deal while knowingly concealing that the Great Barrier Reef Foundation is a sponsor of Channel 9.

The problem is that the deal it totally indefensible as all protocols were broken which makes Karl Stefanovic’s cash-for-comment routine blatantly obvious. It also raises issues with Nine’s planned merger with Fairfax Media which I will deal with later but firstly some of the background and Stefanovic’s grubby cash-for-comment Tweet.

We have moved to our new site address – www.australianpatriotradio.com – as we ran out of space at sosnews site.

There are two new podcasts you may listen to.  Last weeks with Alan Jones discussing the wind turbine disaster government support, and this weeks production where Harry Palmer introduces a great poem by and unknown Aussie that will give you a laughing. Both podcasts contain the weekly “Oz Chat” segment with Harry and Mike.

“A true story from the heart of Queensland”

“The farmers of Queensland would like to tell you a true story” – A must view video how this unchallenged dictatorial government is poised to destroy farming in Queensland.

What is the issue?

Why has the Government proposed these changes?

The Palaszczuk Government promised the Greens to toughen the rules on the farmers of Qld in return for preferences at the last election.

The Queensland Government has admitted it has not done any analysis of the social and economic impacts of the laws, and had no intention of doing so.

Visit this site – www.atruestory.com.au/ – to support our farmers from establishment persecution for votes.

Harry Palmer and Mike Holt -“Oz Chat” today looks at the news exposing our government spies expanding their violation of your privacy once again under the cloak of “NATIONAL SECURITY”. Now the “spooks” will

Harry Palmer and Mike Holt chat about how you can make your vote count to force a fair election result to remove the establishment strangle hold on your parliament.

Harry Palmer speaks candidly with controversially sacked Senator Rodney Culleton about his rise, fall and pending resurrection in the Australian parliament. How he placed the Senate and High Court squarely behind their created hurdles thought to silence this patriotic, independent politician leading the charge to restore your parliament to the people. This interview is without parallel, riveting in content while exposing the backdoor Rod has opened the establishment thought locked and sealed tight…Click here to hear podcast

In solitary confinement and un-convicted is Australia’s only political prisoner Phil Galea that is non-Muslim alleged terrorist languishing in a Victorian jail’s solitary confinement to what seems appeasement of the political correct and Islam fraternity enjoying full government protection condoned by our so called law enforcement protectors wallowing in denial to real factual threats to our nation.

Australia the next Sweden – Over run with hoodlum immigrants

This video shows how multiculturalism works with Islam followers in Sweden, the same people your elected politicians have and continue to allow into our country……

Are you content with this situation you voted for???