The new 8chan website, now called 8kun has been hard to access, due to tremendous online attacks but it was relaunched on an additional domain today: https://8kun.us

As a result, many Q drops ensued, the final one reading ominously: “Indictments coming. [2019] Q”

For several months, many of us have been climbing the walls in anticipation the FISA abuse report from DOJ Inspector General Michael Horowitz. Sara Carter and others have reported that we’ll be seeing it by Thanksgiving or as early as next Monday. 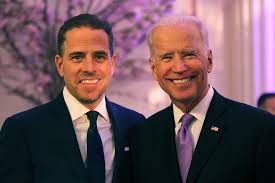 In the meantime, it looks like the Bidens are in deeper trouble than ever. As Dave from the X22 Report says, “Every day that passes, it gets worse and worse for them…

“The New York Times reports that Joe Biden’s own staff thought a Ukrainian gas company paying hunter Biden $80,333 a month while his father was Vice President was unseemly or worse — and they made State Department officials help them to do damage control…

“The only reason why the Democrats are getting away with it is because the media allows it. We no longer have a Fourth Estate media to keep a check on government corruption. We haven’t had it in a long time.

“Instead, we have a media apparatus that actually participates in the schemes and helps sell the fraud. As Lee Smith eloquently said, ‘The media’s involvement in pushing the transparently false 2016 Russian narrative was an extinction-level event for their credibility.'”

Adding to our dystopia is Adam Schiff’s Soviet-style show trial, that is perverting American institutions beyond anything previously imaginable.

Tech giants, YouTube and Facebook are doing their part to protect the coup by de-platforming anyone who publishes the so-called whistleblower’s name.

House Democrats want to keep this going as a way to block what is coming; the DECLAS, the IG Report with several criminal referrals and most importantly, the indictments from Attorney General John Durham. Many members of the government will be charged.

Dave at the X22 Report gives us his excellent geopolitical report on the Deep State that is crumbling all over the world.

Trump has nothing to worry about

Dr Steve Pieczenik is the son of Holocaust survivors, with degrees in Psychiatry and International Relations from Harvard, Cornell and MIT. He served as a Deputy Assistant Secretary of State under Henry Kissinger, Cyrus Vance and James Baker and has collaborated on two bestselling book series with spy novelist, Tom Clancy.

Dr Pieczenik posts his outbursts from time-to-time but lately, he’s been posting daily. On the 30th, he had the following to say:

“I want to talk about the fact that the CIA coup has been confirmed, 1) by sources I can’t mention, within the intelligence community and the second one is by Dr. Rand Paul, who like me is a doctor and served in the military. He made it very clear in one of his brochures and portfolio statements that this was a CIA coup.

“Now, what are we talking about? Number One, we’re talking about the head of the House Intelligence Committee, Adam Schiff, a congressman from Los Angeles, who took over the position that Henry Waxman would have had – there was a transfer of power from a very smart, capable congressman, like Waxman to somebody who was highly-compromised.

“So, when you have a military coup or CIA coup, what you need is a person who’s highly-compromised. Well, what did Adam Schiff do that compromised him? Number One, he took money from Mr. Pasternak, Igor Pasternak from the Ukraine, in 2013 and later on, in another year, he took hundreds of thousands of dollars in order to run for his campaign.

“So, we have, already corruption with a Ukrainian oligarch. Number Two – and this has been confirmed – Adam Schiff was caught in a pedophile trafficking ring, somewhere in Los Angeles and that was at the Standard Hotel run by Mrs. Abramovic, who apparently practices Satanic rituals – but the more important part is that he has been highly-compromised.

“Well, who would manipulate it? Number One, of course is the CIA Director. Now, Gina Haspel, who hasn’t said a word but as I’ve said before the CIA is an ‘excepted organization’, meaning you can fire at will. 40 to 50 percent of the CIA operatives and analysts all are outsourced, so there’s no problem firing them.

“So what do we have here? We have a Ukrainian mess that was created by none other than Mitt Romney’s right-hand man, Joseph Black, a major, major CIA operative – who, by the way, was involved in 9/11 and the false flag and he was Vice Chairman of Blackwater. Isn’t that interesting?

“That is a Hessian [mercenary] Group, that’s funded by Erik Prince, who was thrown out of the United States and had to go to Dubai and the UAE to create another mercenary group.

“So what we have here is a lot of collusion among ex-CIA, FBI operatives and what you people will call the ‘Deep State’, although the Deep State for me is far deeper than one would imagine. It has to do with other members of the 15 other intelligence organizations, which are far more effective than the CIA. I don’t have to get into it but of course, I’ve mentioned before, Defense Intelligence Agency, Military Intelligence G2 – all of whom would respond and be loyal to the President of the United States or more importantly, the Constitution.

“So, what we have, here is Hunter Biden. Not only is he ineffectual and dumb like his father, Joe Biden who I told you had an aneurysm, is demented, clinically-demented, now and Joe Biden has a history of plagiarism, all through his life and lying and confabulating.

“Now, we have Hunter Biden who’s also ineffectual – and by the way was also corrupt and also was thrown out of the Naval Reserve for, guess what, cocaine addiction. So, we have an ineffectual, corrupt Joe Biden and Hunter Biden. Let me give you a quote that says the following, in The Godfather.

“We said, ‘Hold your your enemies close and your friends closer.’ (sic?) Well, that really is my saying but the point of fact, here is that when this coup was initiated – and it’s in full force now – you will see people like myself and others who are in the counter-coup business and we will take it apart.

“Thank you and good night.”