Muslims pull on the Swiss and come off second best

A Swiss secondary school has caused uproar by allowing two Muslim boys not to shake hands with women teachers – a common greeting in Swiss schools.

The boys had told the school in the small, northern town of Therwil it was against their faith to touch a woman outside their family.

A local teachers’ union said the exemption discriminated against women. 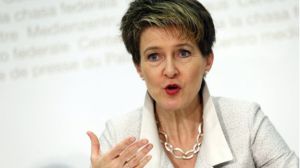 The case has propelled Therwil, a town of 10,000 people in the Basel-Country canton, to the centre of a national debate about Swiss identity. A similar case has been reported elsewhere in the region.

Christian Amsler, head of the Swiss Conference of Cantonal Ministers of Education, suggested that the school may have tried to get an “unpleasant problem out of the way” but had simply made a mistake.

There has been little support for the school’s decision to grant special dispensation to the boys, who are 14 and 15 and have lived in Switzerland for several years.

Therwil Mayor Reto Wolf said the community was unhappy with the decision taken by the school, which is run by the local canton.

“In our culture and in our way of communication a handshake is normal and sends out respect for the other person, and this has to be brought [home] to the children in school,” he told the BBC.

Felix Mueri, the head of the Swiss parliament’s education commission and a member of the anti-immigration Swiss People’s Party, said the decision sent out the wrong message. “Today’s it’s the handshake and what will it be tomorrow?”

There was no reference in the Koran justifying a refusal to shake a woman teacher’s hand, said the Swiss Federation of Islamic Organisations. Saida Keller-Messahli of the Forum for Progressive Islam urged the Swiss not to give in to extremist demands.

However the smaller Islamic Central Council of Switzerland said that a handshake between men and women was prohibited. “After the sex attacks in Cologne (on New Year’s Eve), they asked Muslims to keep their distance from women; now they demand they get closer to them,” spokesman Qaasim Illi told Swiss media.

The justice minister said such dispensation for children was not her idea of integration.

The beleaguered school has tried to find a compromise, by deciding that the two pupils should not greet either men or women with a handshake.

Headteacher Juerg Lauener said the school had no reason to adjust its policy, unless the local authorities ruled against its decision.

Local education officials said the school had taken a pragmatic approach, but agreed it was not a permanent solution as rules should be the same for all pupils.