A meeting of more than 300 cattle producers at Charters Towers has called on the federal government to create the Australian Reconstruction and Development Board and place a moratorium on bank foreclosures before the state’s cattle industry completely collapsed.

Producers demanded the federal and state governments act immediately to introduce the ARDB, modelled on the Rural Reconstruction Board of 30 years ago which was designed to absorb the “toxic” trading bank interest debt that has engulfed primary industries and to issue low interest development funds for primary producers and small business.

More than 20 resolutions were passed unanimously by the gathering of desperate and often distraught cattle producers.

While an unprecedented 80 per cent of the state is reeling under a drought declaration, producers heard how social media and 60 Minutes superstar Charlie Phillott, 81, of Winton, beat the ANZ Bank and had his property returned with a substantial settlement.

He urged producers to stick together when fighting questionable behaviour by the banks.

He said he had never missed a repayment but when the bank restructured his loan he was unable to manage and was eventually put off his Winton property after the bank took it over.

“All of us here owe a great deal of gratitude to Bob Katter for he saw my position and stood by me for two years ,” Mr Phillott said.

Primary Industries Minister Bill Byrne when addressing the meeting started an uproar when he said the State Government would not be building more dams because there was “no business return” from farming.

Charters Towers cattleman Mick Pemble attacked the Minister asking why he could not build dams, and “…do what everybody else in this room does and borrow the bloody money!”

“If I could make it rain I would, but our resources are finite and we are working on what can be done in the circumstances,” Mr Byrne said.

“There are amendments before Parliament and our policy is that water is critical to agriculture but the government capacity to fund such a project is limited.

He said federal money or private investment would be needed to build dams.

Meeting chairman Shane Knuth said he was aware of highly questionable behaviour by bank-appointed receivers that had caused a lot of grief to families through no fault of their own.

He said there were many hundreds of northern producers in financial difficulties and the local industry could collapse unless the bank debt issue was resolved.

“I know some of you want to speak, and I am aware that confidentiality agreements stop you from telling us about what the receivers have done to you, but everyone is behind you and we must stop the foreclosures,” Mr Knuth said.

Burdekin farmer Max Menzell asked the Minister why police were involved when foreclosures took place adding that they should not be used by the banks and receivers as debt collectors because foreclosures were a civil matter.

The Minister strongly defended the use of police stating categorically: “That is the law.”

Mr Knuth said more meetings and what actions should be taken would be called unless the government brought the banks into line and stopped foreclosures immediately. 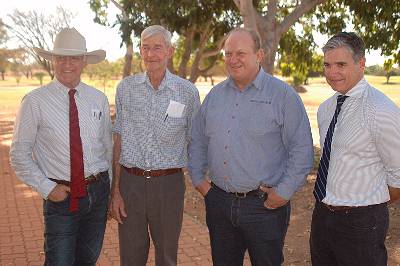 Mr Phillott said the northern grazing industry and businesses owed Bob Katter a great deal of gratitude for giving producers a voice in dealing with banks and foreclosures.

Bob Katter addresses 300 desperate cattle producers and small businessmen at the Charters Towers Debt Summit. Resolutions passed called on the federal government to halt farm foreclosures immediately and enact the Australian Reconstruction and Development Board to absorb toxic bank debt or the northern industry could collapse.