Qld Govt at war with itself over $7m cattle property purchase

More jaundiced reporting from the ABC about Springvale Station west of Cooktown that the Queensland Environment Department bought for $7 million to prevent sediment runoff into the ocean.

The only problem is that bogus data was used to base the purchase, when in fact the Government’s own previously published scientific data clearly showed Springvale Station was responsible for less than one per cent runoff into Princess Charlotte Bay.

In what could be a storyline from the satirical TV series Yes Minister, the Queensland Government has gone to war with itself.

The ABC has learned one Queensland Government department has lodged a legal objection to another department over a plan to mine a river on state-owned land.

The Department of Environment and Heritage Protection is taking on the Department of Natural Resources and Mines in a stoush in the Land Court over Springvale Station on Cape York.

The idea was to stop, or at least reduce, hundreds of thousands of tonnes of sediment from the property washing from the West Normanby River into the Great Barrier Reef.

But it seems — in the best traditions of Yes Minister — the left hand did not know what the right hand was doing.

At the same time the Environment Department was buying the property to prevent damaging sediment flowing down the river, the Natural Resources Department was considering an application to mine the river at Springvale Station for gold and tin ore.

Now the case is before the Queensland Land Court.

In its objection, the Environment Department argues “the public right and interest will be prejudiced by the proposed mining activity as it will directly and negatively impact the biodiversity values for which the property was acquired”.

It says research suggests that “Springvale Station is the source of approximately 460,000 tonnes of sediment runoff every year, which is around 40 per cent of all gully erosion-derived sediment in the Normanby River catchment”.

The West Normanby River joins the eastern branch of the river before draining into Princess Charlotte Bay and the Great Barrier Reef Marine Park.

“The proposed mining activity will likely further destabilise the alluvial and colluvial soils of the West Normanby River and increase soil erosion and sediment loss,” the Environment Department said in its objection.

“… The long-term economic benefits of enhancing environmental outcomes through this acquisition will far exceed the economic and employment benefits of this small mining operation.”

It states the northern section of the reef has been significantly affected by coral bleaching, with “high levels of coral mortality”.

“For those corals to have the best chance of recovery, the water quality needs to be as good as possible,” the Environment Department wrote.

The State Government has already begun removing cattle from Springvale Station in a bid to reduce sediment run-off.

The Environment Department said it would invest a substantial amount of public money for conservation work on the property to further reduce run-off, with the price tag set at $30,000 a hectare.

The department also said the property was home to endangered or vulnerable flora and fauna species, including the northern quoll, red goshawk, brown antelope orchid and spectacled flying fox.

In a statement to the ABC, the Environment Department said it was the Government’s “intention that Springvale Station be declared a nature refuge”.

But it said such a declaration would “not necessarily preclude the commencement of activities proposed under the mining lease application”.

A spokesman for the Land Court said the objection to the proposed mine would be heard in August.

A new Liberal Government will not override state vegetation laws

A new Federal Liberal Government would not legislate over the states to negate tough vegetation management laws proposed by the Queensland Labor Government.

In answer to a question from the floor at a landowners rally at Lakeland, near Cooktown, Senator Matthew Canavan said an incoming Liberal Government would not interfere.

This response falls into line with the original vegetation laws imposed on Australia by former PM John Howard, as a signatory to the UN Agenda 21 agreement.

Opposition Leader Bill Shorten has stated a Labor Government would wipe out any soft vegetation laws enacted by Queensland, conversely prompting a call for the Liberals to remove harsh laws.

Farmer’s organisation Agforce has warned all landowners the state could be virtually shut down by the ALP causing the loss of thousands of jobs and costing primary industries tens of millions of dollars in lost revenue.

Indigenous communities would be the hardest hit, according to spokesman Noel Pearson, who maintains that generational white farmers also have ‘land rights.’

The Member for Kennedy Bob Katter said KAP in State Parliament would do whatever it could to block vegetation bill, due to be debated in August. 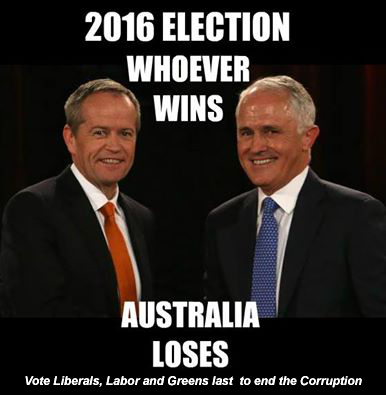