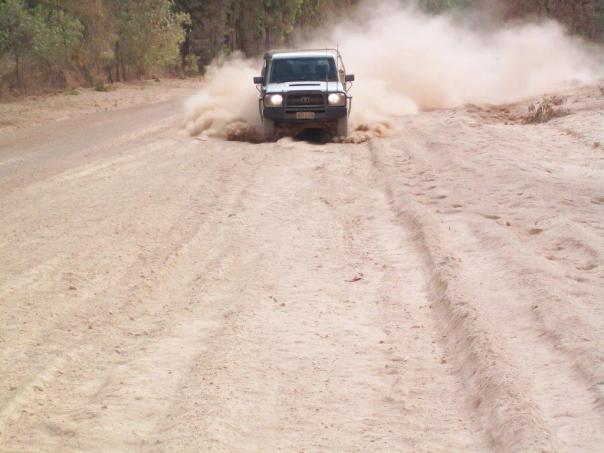 Deep dust holes have developed in a gravel section of the Peninsula Development Road 40 klms south east of Weipa.  The dust holes have been flagged by road authorities however most drivers unfamiliar with the road find themselves dropping into the 400 mm crevices before they can react.

Once a vehicle falls into a hole the steering becomes unresponsive and drivers can often lose control at speeds over 40 klm/hr.

Nearby property owners believe this road disrepair will soon lead to a roll over and injury for unsuspecting tourists who often tow caravans or bike trailers.

The Main Roads Department currently is laying bitumen on southern parts of the PDR, but the Weipa section apparently is a long way from being sealed.

Federal and State funding of $220 million for PDR upgrades has been seen largely misspent according to Peninsula businessmen who accused the MRD and Roadtek of discriminatory tendering and kowtowing to a select few of the indigenous hierarchy.

“There has been awful mismanagement of this project and millions wasted on so-called jobs for the boys like cultural heritage surveys and wrong road materials or spending $70,000 a day to cart water to fill dams because the wet season did not fill them when they could have just carted the water from the Coen River on demand,” one irate local told Cairns News.

“A lot of the water they tipped into dams just ran out the bottom or the sides.

“The whole project has been blackmailed and threatened by the laughable Land Claim No 1 led by the Cape York Land Council.

“The land council told the Main Roads Minister to give them all the work or they would shut down the job.

“Locals don’t mind the indigenous people getting work but they have stretched their credibility with most people on the Cape with their outrageous demands and prices being charged.

Editor: The MRD has repaired these dangerous dust holes much to their credit and made the road much safer.