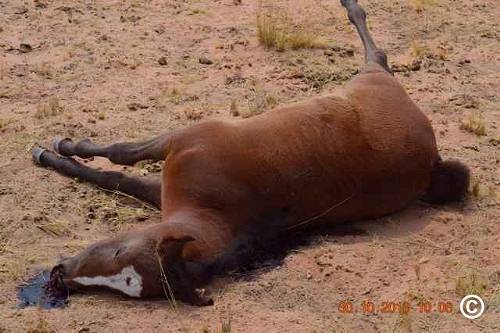 Slaughtered Brumby in the WA Kimberleys a National disgrace

On the 20th October 2013 at the Western Australian East Kimberley’s around Lake Gregory became a killing field for over 7,000 brumbies, executed from mustering helicopters conducting an aerial cull with shooters using military SLR rifles, leaving mortally and seriously wounded horses across the landscape, all sanctioned by the RSPCA saying “it demanded the brumbies be killed instantly through an accurately-fired shot, through the head or thorax”.

No question a culling was required, with many options available, proven humane which aerial shooting is not one of them.

So we ask this question, “why the traditional owners of the land and all the brumbies, were not consulted by the lessees, the WA Minister and the RSPCA over this disgraceful execution of their heritage horses?”