← US Secretary of State says Covid 19 is a “live exercise”
Katter slams the Liberal, Labor love affair with China →

Dumbed-down voters in the October 31 state election it would seem, have returned a socialist Labor government with a majority of 52 seats out of 93. 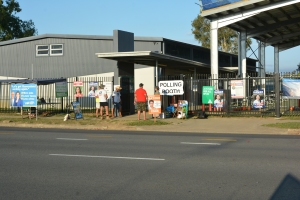 These usual voting irregularities occurred with scrutineers and booth workers taking complaints from voters about dead people voting more than once, legitimate voters being crossed off the roll because someone else had voted in their name,  postal votes applied for in rural areas never arriving, a deluge of suspicious postal ballots arriving at marginal seats, nonsensical Covid distancing for scrutineers and election signage contravening the rules.

These were just some of the issues across the north reported to Cairns News during pre-polling and on polling day.

Making voting a really unpleasant task were hordes of red-shirted dummies from various unions manning booths and harassing voters to support the socialists.

The unions arrived due to the incumbent Labor member’s inability to get help from local Labor Party members.

In the far northern seat of Cook, held by an Aboriginal woman from Yam Island in the Torres Strait, the unions upset opposition candidates, polling booth workers and Queensland Electoral Commission staff.

The abuse from union booth workers in Mossman directed against two female candidates was unprecedented. A Labor booth worker who disassociated himself from the union heavies said normally the offending unionists could be called “thugs, but this mob didn’t have enough intelligence or were not tough enough to be a thug”.

The communists of the Maritime Union made their presence felt by voters. A female voter attending the State School booth in Mareeba told party workers.  “ These grubs really are stupid. They are turning people off Cynthia Lui (ALP candidate) while they push people around.

Cairns News has been advised a group of analysts have all the QEC raw data from the Cook electorate and have been checking the legitimacy of the Labor vote.

We will publish the results when they come to hand.

Why did the Labor Party after being elected in 2017 make their first piece of legislation an amendment to remove voter identification from the Electoral Act?

← US Secretary of State says Covid 19 is a “live exercise”
Katter slams the Liberal, Labor love affair with China →