THE upmarket Arcobar café-bar run by businessman Franz Madlener in Moorabbin, Melbourne, is what one might call a small to medium sized business, turning over a few hundred thousand dollars a year, and employing half a dozen or more staff.

These “middle class” business that represent tens of thousands of jobs in Victoria, have been targeted by the socialist/fascist thug Dan Andrews under his phony COVID police state lockdown. This has also been the standard practice of Democrat governors across the US. 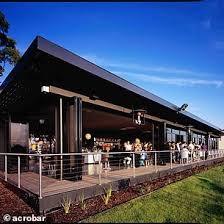 They are happy to have their corporate sponsors like Target, Woolworths, Coles and Bunnings open, but not the small to medium-sized enterprises, who they claim are non-essential.

So should we be surprised that this café owner was attacked, Antifa-style, by rock-throwing, brain-dead “I Stand With Dan” thugs when Madlener indulged in some light-hearted politics?

Madlener had merely put up a good-humoured, tongue-in-cheek sign advising Andrews supporters they would be charged a dollar extra. The sign went viral across the web and news channels.

But the humourless I Stand With Dan crowd who love their slavery, would have none of this and abused and threatened staff and threw rocks through one of the café windows, forcing Madlener to employ security guards overnight.

But yesterday Melbourne freedom supporters turned up to buy up coffee and food to give the business it’s best day of trade since last Christmas.

“In the last 24 hours, I guess since this sign’s gone viral, the level of abuse and vile anger and personal attacks on the business, me and the staff yesterday, was completely over the top,” he told media.

Melbourne’s COVID dictatorship has forbidden cafés and other small businesses like Arcobar from having customers, unlike the big corporate supermarkets and hardware stores that have been open all the time for business, capitalizing on the closures of small business.

While Arcobar has been able to conduct takeaway trade throughout the lockdown period it has lost “a couple of hundred thousand dollars during this period”, Madlener said.

In an act of despicable condescension towards the “unessential” small business people, Andrews and his regime announced last Sunday cafes could have 10 customers at a time in two weeks – but only with the added new burden of ludicrous and oppressive so-called COVID-safe plans.