More than 476 homes across NSW have been lost to wildfire, and at least four landowners burnt to death leaving the gate open for a massive class action against the State of NSW for negligence at common law.

By adhering to the United Nations Agenda 21 environmental policy since 1992, when the state signed on, NSW has experienced massive losses to bush fires.

At least four innocent NSW landowners have been burnt to death by uncontrollable bush fires many of which emanated from national parks or other state controlled land. 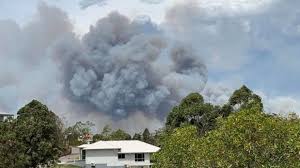 Their policies under ‘sustainable development’ which are actually designed to hinder any development as a part of the UN depopulation program, has caused untold grief and suffering to nearly 100,000 rural and rural residential dwellers.

Cut down a tree on your rural residential estate and find out how effective these UN laws can be.

The fire bill to date is estimated to be more than $250 million to replace homes, without adding any other infrastructure losses.

The Insurance Council of Australia should begin a class action against the state government, for that matter against all state governments where there have been deaths and property losses due to bush fires. Insurers have estimated a damage bill of over $1billion in NSW.

Furthermore as the states now claim ownership of rainwater after it falls onto your land, they should be sued for flood damages as well.

Typically the NSW Government has its priorities all wrong handing out tens of millions to Muslim schools and other Islamic interests yet they have allowed only $220, 000 to replace rural fencing destroyed by their dangerous policies.

A $220,000 package will go to BlazeAid, the volunteer organisation that helps rural families rebuild buildings and fences.

The NSW Government said $100,000 of that would be used to directly purchase fencing materials and tools, and $120,000 would go towards local councils to help BlazeAid with its work.

A typical cattle fence of four barbed wires and steel posts costs nearly $4000 per klm in material alone plus the cost of clearing old lines and erection.

Sheep and goat fencing is much more expensive. Based on the cost of materials only a handful of farms will get any fences replaced.

Rural fire insurance premiums are expected to go through the roof leaving many landowners unable to insure against bush fires.

Why do New South Welshmen put up with such mediocre, mendacious governments?

Comment from a reader who was burnt out in Yeppoon, Central Queensland. It seems the Deep State is operating across Australia in a similar manner to the starting of the intense California fires which we have published in the past:

“We were burnt out in Yeppoon. Fortunately we were insured, others not so lucky, House saved but total devastation of bush land and wildlife. Anything above ground melted. Tyre’s, burnt by leaf litter, what wrong with this picture? Aluminum from mags and cars blocks flowing like that of a furnace, yet trees still standing near them. This is not normal… Going to test water in rain water tanks for aluminum and barium, have been noticing white residue on taps of recent and the clandestine night spraying of an unknown agent several months back when I witnessed what looked like a star appearing from behind a cloud and when revealing my observation to another it was revealed that they too had seen this unusual event, however they viewed it from another angle and it appeared to be a flying object pumping some form of cloud and the light that I saw as a star was actually a spot light viewing the application of the cloud of whatever! The second independent observation of the event was witnessed by several people however this time it was followed by a helicopter.

We need to wake up and look up…”