Co-founder of the Abel Danger news site Field McConnell used his right to a daily phone call, while imprisoned in Wisconsin’s Pierce County Jail to record a statement loaded with bombshells, relating to Ukraine, child sex trafficking, the ill-fated Malaysian Airlines flights MH-370 and MH-17 and the re-opening of a 9/11 investigation, with the help of Russia and Vladimir Putin (!)

As previously reported, Field McConnell, career pilot, 9/11 truth activist and co-founder of the Abel Danger alternative news website was arrested on November 4th in Pierce County Wisconsin. He’s being held without bail, awaiting an extradition hearing on December 2nd. He’s expected to be taken to a Broward County, Florida prison until trial.

Malaysian Airlines Flight MH-17 shot down over Ukraine killed 283 passengers and crew including 38 Australians. It seems both flights, MH-17 and MH-370 were the one and the same aircraft.

McConnell was arrested for violating a temporary restraining order, when he broadcasted on the topic of Kim Picazio, an attorney in Broward County, Florida.

The sound quality is poor but I’ve done my best to transcribe what he said and to put it into context.

His first shock claim is that the Malaysian Boeing 777 aircraft involved in Flight MH-370, which disappeared on March 8th, 2014 en route to Beijing from Kuala Lumpur was the same aircraft (ID# 9M-MRO) that crashed in Ukraine during Flight MH-17 on July 17, 2014, which is what I reported, at the time.

McConnell states, “Broward County, Florida is connected to Ukraine, both by child trafficking, done by practitioners in Broward County Family Court and also, the ownership of the Twin [plane] to Malaysia Airline Systems, Boeing 777, registration identifier 9, Mike, hyphen, Mike, Romeo, Oscar (9M-MRO), which was operated as MH-370 on the 8th of March of 2014 and operated, again as MH-17 on the 17th of July, 2014.”

Abel Danger news creator Field McConnell jailed for airing news the 9/11 investigation will be re-opened, in which case, “Russia and Vladimir Putin may be a powerful allies, with Trump’s 4th Marine…”

McConnell states that this plane was owned by GA Telesis, a Broward County corporation. As I reported on May 2, 2014, two months prior to the crash of Flight MH-17 in Ukraine, GA Telesis purchased the aircraft and delivered it to Tel Aviv’s Ben Gurion Airport on November 4, 2013, where it had remained “in storage”, as recorded on the Planespotters website – presumably, until it was used four months later, in March, for Flight MH-370.

In 2014, I’d reported that GA Telesis was founded and is co-owned by Abdol Moabery, son of wealthy Iranian immigrants. Moabery had previously been an executive at two George Soros-owned companies, Aviation Systems International and C-S Aviation.

2) Food for the Poor; 3) Kids in Distress; 4) Florence Fuller Child Development Center; 5) the ISTAT Foundation; 6) the Factor Foundation; and 7) the March of Dimes.

Do these children’s charities relate to what McConnell is referring to, when he says that the “ownership” of the plane are “practitioners” in child trafficking?

The next series of shock claims McConnell makes are his comments on the eventuality that the 9/11 investigation will be re-opened, in which case, “Russia and Vladimir Putin may be a powerful allies, with Trump’s 4th Marine…”

The reason for Russia’s involvement has to do with three Russian transport planes downed between 2012 and 2016 by the same secret “technology deployed on 9/11, in MH-370, in MH-17 and the 16-plus airliner murders-for-hire, collectively known as ‘The Baker’s Dozen’.” 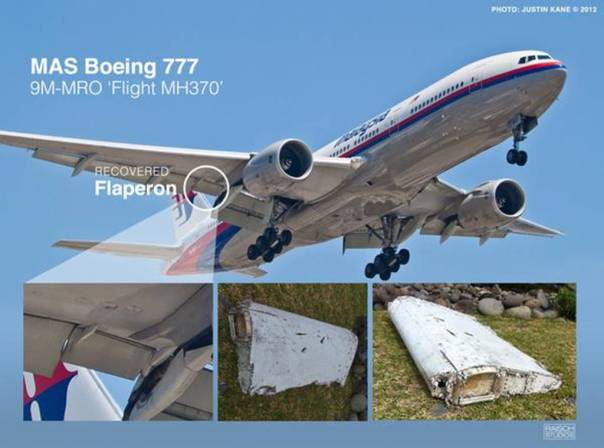 MISSING Malaysia Airlines flight MH370 may have “floated for a while” on the surface of the Indian Ocean before sinking largely intact, according to Malaysian media reports.

An interview with satellite communications expert Zaaim Redha Abdul Rahman by Malaysia’s national news agency Bernama highlights the limited damage to a flaperon found washed up on Reunion Island as supporting the idea that the Boeing 777-200ER with 239 people on board had a successful emergency landing.

It vanished from radar shortly after taking off from Kuala Lumpur International Airport early in the morning of March 8 last year.

The news claims come as Australia’s Transport Safety Bureau rejects claims search crews have found debris on the ocean’s floor that may have the missing plane.

ATSB Chief Commisioner Martin Dolan said images published by the Daily Mail overnight were several months old and were classified ‘Category Three’ — or highly unlikely to be associated with an aircraft debris field.

“The underwater search so far has identified more than 400 seabed features that have been classified as category three,” Mr Dolan said. “It’s all been eliminated.”

He said there were no plans to return to those sites for a “closer look” in November when conditions improved.

Only two items had been classified as category one — or likely to be associated with an aircraft debris field — and they had been ruled out after further investigation found they were part of an uncharted shipwreck.

Fugro Discovery arrived back at the search site yesterday to resume work scouring the ocean floor.

So far just over half the 120,000 square kilometre priority search zone has been scanned — or an area the size of Tasmania. 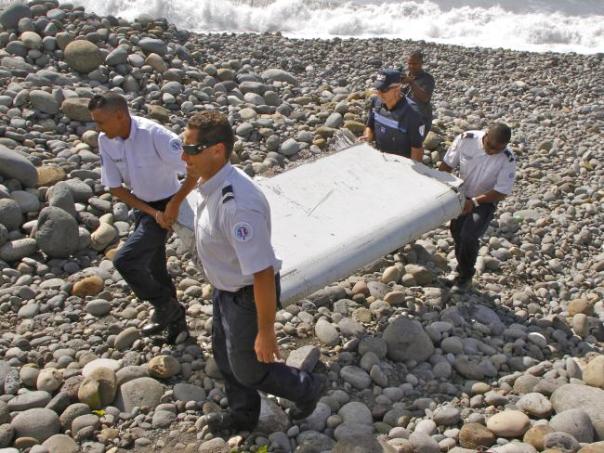 Low-energy impact … The lack of compression and distortion of the flaperon believed to have come from MH370 indicates it entered the water in a controlled manner, experts argue. Source: APSource:AP

Aircraft ‘floated for a while’

Malaysia’s national news agency cites the lack of a debris field after MH370’s disappearance and the lack of crushing to the flaperon recovered late last month are evidence the aircraft was largely intact.

“I believe that when the aircraft went out of fuel, it glided downwards and landed on the water with a soft impact … that’s why I believe the plane is still largely intact,” Zaaim Redha, who was involved in analysis of the missing airliners satellite-sourced flight data immediately after the incident in March last year.

“It (the flaperon) was only slightly damaged and was just encrusted with barnacles. Its appearance indicates that it was not violently torn off from the aircraft’s main body … it does seem that it got detached pretty nicely at its edges,” he said.