Letter to the editor

There was a time when true environmentalists strove to protect wild things. Now the green shirts have become enemies of the environment by pushing green energy and demonising the building blocks of life – carbon and carbon dioxide.

Wind turbines and their cobweb of connecting roads and transmission lines have destroyed native trees and grasses, scarred and uglified wild hilltops, and littered continental shelves with naval and aerial obstacles. They create wind and rain shadows and decimate resident and migratory birds and bats.

Industrial-scale solar is no better, stealing sunlight from every plant that tries to live in the shadow of the panels. Solar-thermal arrays have the additional trick of roasting any birds, bats and insects which fly through their focussed rays of heat.

Their promotion of ethanol and bio-diesel has caused the widespread conversion of cropland and clearing of natural vegetation and forests to grow industrial crops like corn and palm oil. This has also reduced food supplies, increased food prices and forced some poor people to poach in parklands.

And the stupid promotion of burning wood for power and home heating has taken some cities back sixty-five years to the era of London smogs. Forests are again being cleared and wood smoke is again choking urban communities.

None of these expensive and destructive activities will have any measurable or beneficial effect on global temperature.

What is the real agenda?

The Paris Party – our neck is in the noose

Paris Climate Party agrees . . . to have another Party 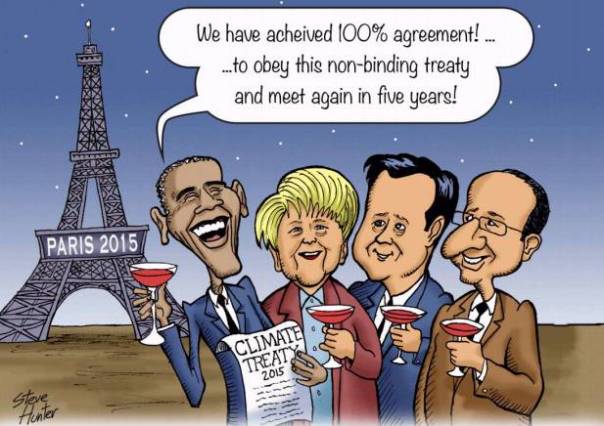 Premature Celebrations by Sceptics
Many climate sceptics are celebrating that “nothing in the Paris deal is legally binding”. They should look deeper. They have suffered a huge political defeat.

Skeptics are winning the climate science debate, but the main battle is no longer about facts and science – it is about propaganda and politics. There were few scientists at COP21 talking about atmospheric physics – just politicians, bureaucrats and green activists discussing emission targets, carbon taxes, climate reparations and who will pay.

The Paris party organisers managed to assemble representatives of 196 nations with the aim of getting 100% agreement on something/anything that would assist their clandestine campaign for world government and world taxes. This process will cripple the industrial power and political freedom of the Western democracies. They achieved agreement because of leadership by UN loving Western centralists like Obama, Merkel, Cameron, Hollande, Trudeau and Turnbull, helped by misguided theologians, and supported by vested interests in mendicant nations and some powerful competitors of the West. They spent two weeks reworking the draft document until there was nothing in it that offended any nation. Most of them wanted their benefits clauses made compulsory, but the would-be-providers of such largesse dared not sign obviously binding liabilities because the media and their home electorates were watching.

The UN game plan is for this massive global climate circus to meet regularly in pleasant locations, setting illusory targets, generating publicity and seeking even more green levers to pull. So there is only one legally binding clause – an agreement to table targets, and to meet again.