← If you get the experimental Covid gene therapy jab, it’s too late and no going back
Doctor demonstrates masks are futile preventing COVID-19 spread → 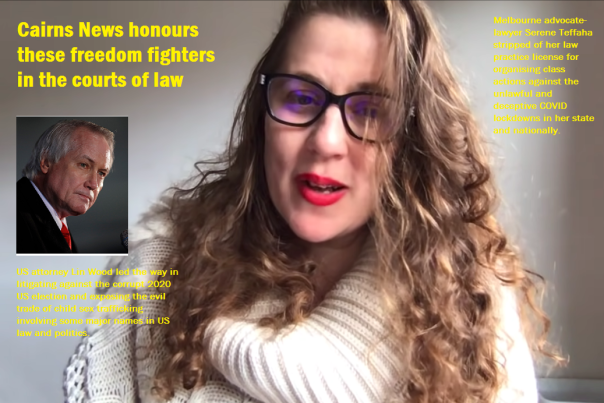 VICTORIAN lawyer-advocate Serene Teffaha is fighting back against the Victorian Legal Services Board’s outrageous cancellation of her law practice licence. But the feisty Serene-in-name-only said in a briefing on YouTube losing her licence would not affect the class actions against the COVID lockdown tyranny. She has also written a whistleblower complaint against the so-called legal watchdog for what she considered to be the targeting of her litigation.

Again, it looks like Australian law, political and banking interests have shown themselves to be under the sway of dark forces with their vicious, vindictive, unjust and unlawful treatment of Teffaha.

The VLSB has also ordered the Commonwealth Bank to seize her accounts and a trust account for clients involved in class actions against the Victorian government. They also handed control of her firm to the big corporate law firm Hall and Wilcox, which is demanding $600 for every class action client who wants a refund. Teffaha has not been accused of any crime or faced any complaint from clients.

Teffaha appears to have upset the Victorian establishment because she launched class actions against the imposition of the destructive, deceptive and unlawful so-called “pandemic response measures” driven in her state by the power-crazed Labor Party lunatic named Daniel Andrews, who is missing in action from his Premier’s job under highly suspicious circumstances and has been issuing faked up, Photoshopped pictures allegedly showing him in recovery.

She has also spoken out about corruption issues in the Family Court of Australia, which lead to statements from the Australian Bar Association and the Law Council that her comments were “baseless, inappropriate and undermining” of the criminal justice system. In a court matter in Queensland, she also raised the issue of child trafficking and the lack of official action against it.

That prompted a magistrate to lodge a complaint, not against child trafficking, but Teffaha, for making submissions that “may be prejudicial to or diminish the public confidence in the administration of justice”. It seems Teffaha has been touching a very sensitive spot on the legal fraternity.
In March the VLSB sent Teffaha a “notice of proposed cancellation of practising certificate”, around the time that she filed the class action on behalf of 3000 public housing tenants subjected to the hard lockdown that confined them to their units in July 2020.

In December the Victorian Ombudsman Deborah Glass found the Andrews government breached the residents’ human rights by suddenly imposing the lockdown without warning and caused much trauma among residents. That was a big boost for Teffaha’s class action. But now the VLSB has appointed Hall & Wilcox to “manage the litigation”. The Age newspaper reported the firm “has taken over the operational responsibilities of Advocate Me”. In politics this would be called a coup. It might also be called the theft of a business from its rightful owners and its clients. The Age reported “the board has not said what led to the cancellation of Ms Teffaha’s licence.”

Teffaha has handed her housing shutdown clients over to another lawyer and said that lawyer was now under threat due to the VLSB actions. How bizarre that a lawyer-advocate’s specialized action be handed over to some corporate law firm that is probably reliant on all sorts of government work.

Teffaha’s treatment mirrors that of Lin Wood, a prominent US defamation lawyer from Georgia who suddenly became a national villain in the eyes of the Democrat-media-big tech corporate cabal because he took very clear election corruption matters to court, only to find the courts did not have the integrity or guts to even look at the evidence.

Wood also committed the unmentionable cardinal sin of accusing certain people in high office of crimes against children – among them Chief Justice Roberts of the US Supreme Court. Wood has evidence to back up his whistle blowing and has filed it in a US court. Mainstream media and the Chief Justice are silent, of course.

The Wood-Teffaha cases have unsurprising parallels: The system, i.e. the dominating corporate-government-media and legal elite are indignant that their “essential narratives” are being questioned and challenged lawfully. Those narratives are that (i) child trafficking among elites is a conspiracy theory (ii) elections in the democratic West always represent the will of the people and (ii) that humanity is facing its worst health crisis in history that the only way to defeat it is vaccines, masks, lockdowns and social distancing. In Australia, Teffaha’s Victorian and national class actions are right “in the face” of that manufactured story that is driving a full-frontal assault on basic rights and freedoms.

Wood, one of America’s most prominent defamation lawyers, has managed to fight off efforts by the State Bar of Georgia to have his law license revoked, but Teffaha has already been dealt that blow by the cowards who inhabit the legal, political and banking establishment.

In a post on Telegram Tara Garozzo, a Brisbane candidate for the Informed Medical Options Party said “this is what happens to anyone who challenges the corruption in our Australian system and what they will do to protect themselves and their high-end thugs. They have not only cancelled Serene’s licence but now recently the Commonwealth Bank of Australia has seized Serene’s trust fund – a trust fund that the people of Australia have kindly donated … so that she can continue her work of taking down this corruption. They have treated Serene like a criminal, well actually worse than a criminal for they normally wouldn’t even treat pedophiles or drug dealers this way.

“What’s worse is they have absolutely no substantial evidence to charge her with any crime to support their illegal cancellation of her license and seizing of the trust fund. They have threatened Serene, tried to intimidate her and are now blackmailing her to provide all confidential information of her clients and their cases without her clients’ permission or consent if they wish for their money to be returned.

“This is total extortion at its highest level. Serene refuses to give any information against her clients will. She has passed her cases to another lawyer who they are now trying to silence as well.” Garozzo said one of Teffaha’s clients was a victim in the Melbourne public housing towers lockdown – a woman who was suicidal. Instead of releasing this person to seek medical attention, she was thrown against a wall by one of the police officers.

“This is what your government doesn’t want you to know about. This is what they are trying to cover up and much, much more. Serene continues to fight for the Australian people who have a right to be heard and represented. This has only reinforced her reasoning as to why this corruption must be bought to a stop and has only pissed her off and put a whole lot more of fire in her belly.”

← If you get the experimental Covid gene therapy jab, it’s too late and no going back
Doctor demonstrates masks are futile preventing COVID-19 spread →