Preliminary data from a clinical trial involving more than 100 covid-19 patients in Ecuador has resulted in a claimed 100 per cent cure rate within four days, according to Andreas Kalcker who is closely following the results of the effort. The tests were carried out by the Asociacion Ecuatoriana de Medicos Expertos en Medicina Integrativa, a group of integrative medicine practitioners.

Ecuador has been hit particularly hard by the coronavirus, and the current “standard of care” promoted by Western medicine — largely based on the use of ventilators — has been killing the vast majority of critical patients while utterly failing to address the real root of the problem.

Covid-19 isn’t an Acute Respiratory Disease (ARD), it turns out. Rather, it often presents as an inflammation and blood clotting condition (see The Lancet research, below) which causes the blood to be unable to carry oxygen, resulting in patient hypoxia and eventual asphyxiation.

This is why intravenous chlorine dioxide — which immediately delivers a high dose of oxygen to blood cells — is believed to work so effectively against covid-19. It reportedly restores the oxygen-carrying capacity of hemoglobin and clears the clotting in the lungs, all while destroying pathogens.

Chlorine dioxide researcher and advocate Andreas Kalcker has posted a video (in Spanish) where he explains the findings. That video, entitled, “Mas de 100 Casos de Covid-19 recuperados con CDS por medicos de Aememi,” is found at this link on Lbry.tv.

In the video, Andreas explains that researchers were able to achieve a complete cure in just four days through the use of intravenous chlorine dioxide (ClO2). Here’s a photo of some of the researchers holding syringes of chlorine dioxide, which is then infused into the patients’ blood, where it releases a wave of oxygen that researchers believe saturates the blood with O2 while killing pathogens: 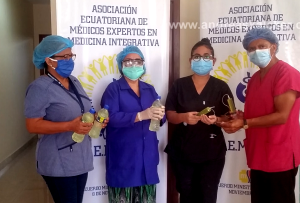 Medical staff in Ecuador holding syringes filled with Donald Trump’s bleach chlorine dioxide. You won’t get this lifesaving news on the ABC or any of the controlled Australian media

In another bombshell science paper published May 7, 2020, in The Lancet, researchers Dennis McGonagle and others determined that covid-19 is not a respiratory disease but rather “diffuse pulmonary intravascular coagulopathy,” a kind of blood clotting that presents in lung tissue.

This explains why patients with covid-19 are dying from hypoxia (lack of oxygen) and are frequently killed by the use of ventilators. As an ICU doctor from New York warned months ago, doctors are treating the wrong disease. (That doctor’s YouTube channel was deleted and all his videos were censored, of course. No one is allowed to question medical orthodoxy in the medical police state known as the United States of America.)

Study authors also found the inflammation triggers a worsening of the condition, which implies that anti-inflammatory interventions might be the key to saving lives and ending the pandemic. From the study:

MAS stands for Macrophage Activation Syndrome, and it is an inflammatory response stemming from an over-reactive immune response, similar to the “cytokine storm” that’s being widely discussed (which vitamin C helps prevent, according to published research). As the study explains:

To simplify these findings, covid-19 is not acute viral pneumonia impacting the respiratory system but rather an inflammation-based immunological response that leads to thrombosis (clotting in the lungs) which kills the patient. The use of ventilators only makes the problem worse, which is why previous observational studies have found that 88% of patients put on ventilators end up dying. They are dying because the ventilator treatment is the wrong treatment.

Chlorine dioxide is reportedly saving 100 percent of the patients studied so far because chlorine dioxide floods the blood with instantly usable oxygen while killing the pathogens responsible for clotting. There is also anecdotal evidence that some people are beating covid-19 infections with high doses of aspirin, a blood thinner, although this information should not be taken as advice for treatment, and far more research is needed on blood thinners and anti-inflammatory interventions.

This may also help explain why turmeric and vitamin D are associated with strong reductions in inflammation in the body, which may prove useful in balancing the immune response and preventing the kind of imbalance that can lead to immune system overreactions.

Notably, the criminal Big Pharma cartels and corrupt government regulators (like the FDA, FTC, CDC) are going out of their way to try to criminalize or suppress any non-vaccine, non-pharma solutions that might save lives. Over the last month, we’ve all witnessed an astonishing level of aggression and mafia-style tactics used by the FDA and FTC against pioneering researchers offering a variety of possible solutions, from colloidal silver to chlorine dioxide and even intravenous vitamin C.

They’ve even declared war on hydroxychloroquine being taken by Donald Trump and the medical establishment has been engineering clinical trials which are designed to fail from the start in order to discredit the off-patent, affordable drug.

There is no doubt that Big Pharma’s obedient government lackeys are at war with truth and are desperately trying to suppress information about natural cures and integrative treatments that might eliminate covid-19 before vaccines can be made available.

The techno-fascist tech giants like Facebook, Google, Vimeo, YouTube and Twitter are all-in with Big Pharma, going out of their way to censor and destroy all information that criticizes vaccines or offers wisdom about natural treatments or integrative medicine interventions. This criminal cabal of Big Tech and Big Pharma is the enemy of humanity, as they are deliberately working to worsen the pandemic, increase suffering and death and extend the punishing lockdowns for as long as possible in order to cause several economic damage while preparing the masses for mandatory vaccines.

We are all witnessing a powerful criminal gang of corporations and regulators who are deliberately seeking to destroy human society as we know it today, and they are the gatekeepers of information on the ‘net (and in the news). This is why we are repeating our call for the CEOs of all the top tech giants to be arrested and charged with crimes against humanity, then prosecuted in a court of law(if we can find one). Over the weekend, a member of Italy’s Parliament gave a rousing speech in which she labeled Bill Gates a “vaccine criminal” and demanded he be arrested and charged with crimes against humanity.

Such efforts should not be limited to Bill Gates, however. They must include the criminals of other tech giants as well as the corrupt, anti-human criminals running the FDA, FTC and CDC, AMA, FSM, among others. Their crimes against humanity must not go unanswered, and they must be held accountable in a court of law.

The destructive, anti-human agendas of Big Pharma and Big Tech are incompatible with human freedom and a sustainable human civilization. These anti-human institutions must be permanently dismantled, and humanity must rise up against this threat in the same way we once awakened against the Third Reich and the rise of Nazi fascism and the Holocaust.

Right now, Big Pharma, Big Tech, the FDA and the CDC are plotting to kill billions of human beings with an engineered bioweapon, a risky vaccine, and high-fatality prescription drugs that make people more vulnerable to covid-19. These enemies of humanity must be stopped, and the truth about chlorine dioxide must be set free so that human beings can be saved from suffering and death.

To learn more about the establishment’s war on truth (and war on humanity), watch my recent interview with Dr. Judy Mikovits, who has also been subjected to extreme censorship for raising the alarm about how vaccines are spreading infectious disease.

Editor: We apologise for a run of Coronahoax articles however the medical mafia and their directed governments must be pulled up before we are held down and vaccinated with a deadly toxin by the military and police.