Pastor Tim’s distressed children watch their father head off to jail for 10 days for the alleged crime of disobeying a “health order” and meeting in the open air. 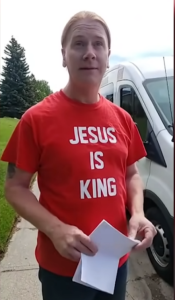 Pastor Peter Reicher after being served by police with an injunction and and summons to attend an Alberta provincial court.

By TONY MOBILIFONITIS
IN Melbourne, Australia, police acting for the global COVID dictators arrested Paul Furlong, the pastor of a small church, for holding an outdoor service and locked him up in a remand centre for a week. They even took away his Bible, forcing him to sign papers to get it back.

Pastor Furlong was released from custody last Tuesday but banned from social media as a condition. Police also tried to stop him from contacting Monica Schmidt of Reignite Democracy, who told Alan Jones on Sky News that Sen Sgt Luke Holmes of Victoria Police commented: “Mr Furlong holds his beliefs very strongly and this is a concern to us.”

In Calgary, Alberta, Canada, Baptist pastor Tim Stephens was also one of several Canadian pastors arrested recently. Like Ps Furlong, Ps Stephens was charged with “offences” relating to disobeying the orders of a chief health officer and holding church services.

The arrests and jailing extended to People’s Party of Canada leader Maxime Bernier, for holding a political rally in Manitoba province. So, freedom of religion and political belief are not protected in Canada? The arrest is being challenged in court.

Pastor Stevens was arrested again on June 15 and taken into custody after a police helicopter spotted him and his church members gathering outdoors. The distressing arrest took place at his home in front of his wife and crying children was covered by live by Rebel News. Other media were noticeably absent.

The arresting officer came across as the goody two-shoes Christian pointing out to the pastor that his parents were Christians too, but watched their services online, so why shouldn’t he “obey the law like everyone else?”

Unfortunately, most people including cops do not understand that “health orders” are not the same as law. They are merely orders. Another word for an order given by government is diktat, defined by the Cambridge Dictionary as “1. An order that must be obeyed, or the act of giving such an order”.

That’s how a dictatorship operates, merely giving orders that must be obeyed, without reference to restraining constitutional laws. So, by definition, disobeying the orders of a government – especially those given based on deception and fraud – is disobeying a dictatorship.

As pointed out by Ps Stephens, the highest law of Canada is the Charter of Rights and Freedoms that upholds freedom of religion as a right of all Canadians. It is a historic right supported by constitutions of all free nations, but now under serious attack by a global cabal of greedy, dishonest billionaires like Bill Gates and George Soros, and their government sycophants such Anthony Fauci and the premiers and chief health officers of Australian states and Canadian provinces.

In respect to the arrested pastors, no criminal acts were involved except for the fact that police went to a court to obtain an enforcement order of a court and disobeying such a court order comes under the Criminal Code.

Police said Stephens was arrested for hosting an illegal outdoor gathering that did not comply with current restrictions. Earlier this this month, Alberta Health Services seized and physically closed his Fairview Baptist Church to prevent access until Stephens could “demonstrate the ability to comply with these restrictions.”

Here’s the rub. If the global COVID dictatorship gets its way you will have to “demonstrate the ability to comply with restrictions” for almost everything you do. The all-powerful bureaucrats, on their big salaries and public service perks will be kept busy approving everything about your organisation, business, even home.

The provincial bureaucrats of Alberta already have decreed a “Stage 2 reopening plan”, under which places of worship are required to limit attendance to one third of their building’s maximum fire code occupancy. So, they now have the power to control religion, and by extension, any sort of gathering at any location. After all, they can’t just pick on the Christians, can they?

The anti-virus zealotry of these Canadian provincial and Australian state bureaucrats might have some credibility, were it not for the fact that these same bureaucrats are not only ignoring but suppressing the use of common drugs like Ivermectin and hydroxychloroquine to treat the dreaded virus. Highly qualified medical researchers and doctors are crying out to governments to release these treatments.

Indian state governments, faced with rapid apparent viral spreading of mutated COVID-19 strains, have actually opted for widespread use of Ivermectin. Indian lawyers are also suing the chief medical officer of the WHO for suppressing the treatment.
The health bureaucrats are also furiously pushing vaccines that are killing and maiming very large numbers of people, apparently to save people from a virus that is lethal to less than 1 percent of those who get infected, and from which most people recover without intervention or with minimal intervention.