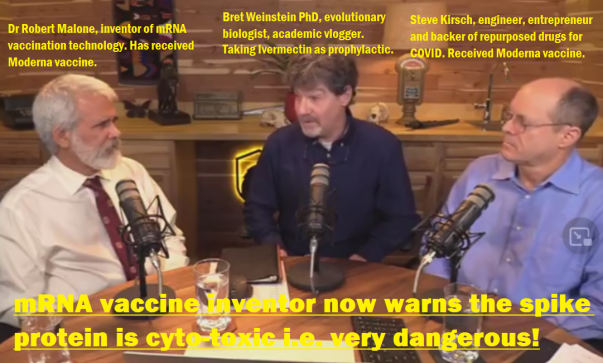 By TONY MOBILIFONITIS
ROBERT Malone, the doctor who invented mRNA vaccine technology, has warned the vaccines are “very dangerous” because of an unforeseen cytotoxic (toxic to cells) effect of the spike proteins encoded by the vaccines. The same doctor has also spoken out against the widespread suppression of common drugs like Ivermectin, that is a repurposed and proven treatment for COVID-19.

The vaccines are now linked to at least 5000 deaths (higher estimates are 10 times that) in the US including deaths of teenagers, who do not need the vaccine because children to teens are almost entirely non-susceptible to the infection. But vaccinated teens are reporting heart inflammation (myocarditis) from the vaccines and young pregnant mothers, abortions. Many post-vaccination deaths are reported as unrelated to the vaccines.

Dr Malone went public on a widely followed YouTube channel Dark Horse, hosted by husband and wife biologists and free speech advocates Bret Weinstein and Heather Heying of Portland, Oregon. Also appearing with Dr Malone was engineer and entrepreneur Steve Kirsch who has been researching adverse reactions to COVID vaccines and sponsored a group to promote COVID treatment with repurposed drugs such as Ivermectin.

Both Dr Malone and Kirsch, who has published articles in TrialSite News exposing the COVID vaccine dangers, warn that the spike protein cleaves off the cell and travels throughout the body including to the heart, brain, lungs and ova in females. Kirsch says medical authorities are not acknowledging the 50-times increase in myocarditis and pericarditis in teenagers.

“We are being told it is a ‘safe’ vaccine so adverse effects are attributed to another cause so it looks to everyone like nothing is wrong. There is deliberate suppression of early treatments,” he said on a BitChute page running the discussion.

Dr Malone said in a normal vaccine development situation there is rigorous animal testing that would have picked up the spike protein problem. “We absolutely should have known and understood that,” he said. “I received a (Pfizer vaccine) data package and reviewed it on behalf of TrialSiteNews and I was very alarmed by what I saw.

But Dr Malone’s alerts to the FDA were dismissed on the basis of insufficient evidence and media have been ignored as the vaccines are pushed relentlessly as “our only hope” through governments by the global pharmaceutical complex and its crooked front man Dr Tony Fauci, who is now the subject of a Bill sponsored by Republican members of Congress to sack him. Kirsch calls Fauci the worst mass-murderer in history.

Dr Malone is not anti-vaccine and in fact took the Moderna mRNA vaccine, as did Steve Kirsch, apparently before becoming aware of the dangers involved. Weinstein is taking Ivermectin as a COVID-19 prophylactic. Kirsch attempted to get National Institutes of Health support for a steroidal drug called Fluvoxamine, confirmed in a large phase 3 trial (standard of evidence) to be very effective against COVID. Kirsch said the NIH did not even respond and neither did the Gates Foundation or the WHO, when informed.

Kirsch also referred to Ivermectin and a report by Dr Tess Lawrie of South Africa, done three months ago and referred to the WHO, but again, ignored. “Tess Lawrie created this report and these guys did nothing. They sat back and said ‘Well Tess, it’s not peer-reviewed, nobody’s going to peer review it so we don’t have to do anything.” Kirsch said the study was subsequently peer reviewed, submitted to a medical journal for publication.

His frustration was compounded when he presented evidence supporting Ivermectin to the top Indian health authorities. “They said we believe in evidence-based medicine. I said here’s all the evidence. Here’s the systematic review and meta-analysis that you need. That’s the highest level of evidence, look at the evidence, and the response is ‘Well the WHO and NIH don’t say so, so sorry I’m not interested’.”

Dr Malone said the Ivermectin was “the sticker” for him. “I just got another report of a physician in Africa who had championed Ivermectin and there was a regime change and now she’s being threatened with being put in jail.”