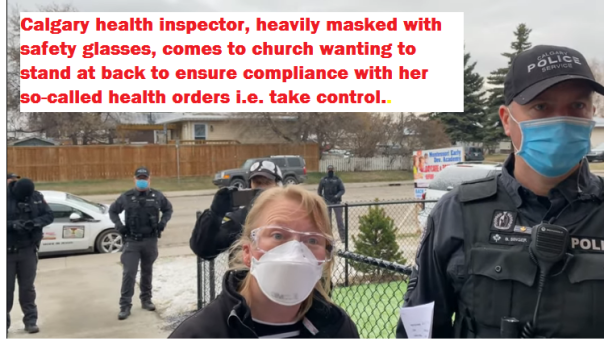 A Calgary health inspector tries to “reason” with Pastor Pawlowsky about her so-called municipal health orders. The pastor would have none of it and told her to see his lawyer and make an appointment. Below: Aylmer Church of God congregation and supporters take a stand. Rev. Hildebrandt is on the right.

Not since the totalitarian excesses of the Soviet, Eastern Bloc and Chinese Maoist communism has the western world seen the type of religious and business restrictions now being carried out in the name of stopping the spread of a virus that by many accounts is just a genetically engineered flu virus that can be cured with various cheap medicines and supplements.

Concurrent with Pastor James Coates of Grace Life church near Edmonton, Alberta, being jailed for several weeks and the church building fenced off, Calgary pastor Artur Pawlowski is fighting off another police-backed municipal attempt to disrupt his meetings. And out east in Ontario, Church of God members in Aylmer (about 190km from the provincial capital Toronto) are being charged after another full and defiant gathering against the province’s “emergency health orders” on Sunday, April 25th.

The week previous, Aylmer Police Service officers visited the church on Tuesday night after being “tipped off” about a gathering inside the church. Snitches are an essential part of any police state. Police allege 18 people weren’t wearing masks or physically distancing in the organised event (shock, horror) and will be issued fines. But the Canadian Justice Center for Constitutional Freedoms will defend those fined at no cost. The Canadian-based Rebel News also has a team of lawyers dedicated to fighting Lockdown fines at no cost. Details can be found at endalbertalockdown.org.

Congregation members including a confronted challenged two police officers on the church property on the outskirts of the town. Police were told they were in violation of the Canadian Charter of Rights and Freedoms and on private property without a warrant. Since early in the “pandemic” in 2020, the Aylmer church has repeatedly made news over its staunch stance against provincial pandemic orders. Lisa Bildy, the lawyer representing the church, is challenging the earlier charges against church leaders and parishioners on constitutional grounds, with a hearing set for July.

Bildy says the church and its leader, Pastor Henry Hildebrandt, have taken a stand for Canadians’ fundamental liberties during the COVID-19 pandemic. “People like Henry Hildebrandt, whether you agree with him or not, have taken a stand for those fundamental liberties which our western, liberal democracy is based on,” Bildy told CBC News.

Small businesses across Canada are also taking a stand against the destructive lockdowns. Corduroy Restaurant in Kitsilano, British Columbia is one such business defying the so-called public health orders. Owner Rebecca Matthews said the initial lockdowns plus their inability to get staff and run a take-out food service cost them six months of trade.

“We’ve been in this pandemic for a year now and the science just doesn’t prove that these lockdowns are necessary, especially closing small businesses. We were at Costco today and it was packed, lined up shoulder to shoulder, no social distancing … how come they can be jammed full and we have to be closed?” she told Rebel News on April 5, at the start of a three-week lockdown including churches and indoor dining.

Across the border in Alberta Chef n’ Pigeon Lake owner Nathan Zukiwski defies the third lockdown and reopens his restaurant. Nearly immediately, Alberta Health Services hammered him with an inspection and threats of fines, closure notices, pulled permits and more.

Lockdowns, coerced masking and vaccination are just a test run for the hellish, eugenics-based society that deluded power and money-corrupted cretins like Bill Gates, the Rockefeller family and Klaus Schwab of the World Economic Forum wish to create. The controls they prescribe violate every basic right including freedom of religion, which incorporates freedom to gather, speak, and exercise conscience and belief.

If the pandemic was the great threat they claim then government health departments across the world would not be banning or ignoring the non-vaccine treatments like hydroxychloroquine and ivermectin in combination with supplements like zinc and antibiotics. Why is it that the US doctors’ group Frontline COVID-19 Critical Care Alliance, that has compiled dozens of studies and trials on ivermectin, are being ignored?

The vaccines, meanwhile, are a disaster, with thousands of people dying after getting shots or suffering debilitating neurological injuries. One of the worst offenders is the Moderna vaccine that has left a trail of destruction in the Canadian town of Lytton, British Columbia, targeted for a vaccination campaign because of its high number of indigenous Canadian Indians. That’s the eugenics mentality at work –classifying people into racial stereotypes and prescribing a one-fits-all medicine.