ABC gets egg over its face from its own immigration poll

The concerted campaign by the ABC against Senator Fraser Anning and federal MP Bob Katter over Muslim immigration has left the public broadcaster with egg all over its collective face.

According to an ABC poll held on August 15, in an attempt by the left wing of the ABC to further subvert Katter and Anning, 75 per cent of 38,400 respondents said Anning should not apologise for his speech. 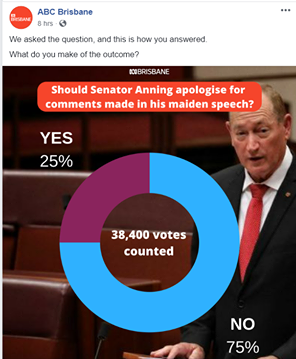 Significantly the poll was taken in the south east corner of Queensland, taking in Brisbane.

All the usual detractors from the Liberal, Labor and Greens have been left floundering in the wake of Anning’s dialogue which the majority of Australians were waiting for a politician to air.

Another similar poll, according to KAP staffers, shows 98 per cent support for Anning’s speech.

Cairns Liberal politician Warren Entsch, known locally as the father of the gay marriage debacle, was critical of Katter exposing the flaws in the Liberal immigration policy.

Entsch described Katter and his candidate Dan McCarthy who is likely to take Entsch’s federal seat of Leichardt, as ‘coming out of the sewer.’

After the polling and many thousands of comments supporting Katter and Anning on the Channel 7 website, Entsch has proven himself a continual embarrassment for the Liberals and his constituents.