Protesters say there is a much broader, hidden agenda

More than 60 police officers descended on Darlinghurst, in central Sydney, as an anti-same-sex marriage rally was held in the city’s gay epicentre.

A crowd of about 20 people associated with the “straight lives matter” event at Green Park were outnumbered by counter-protesters, who tried to drown out the speeches with chants and horns.

Sydney MP Alex Greenwich, who is a leading voice in the “Yes” campaign, dismissed the rally in his electorate as a “distraction” and spent the day doorknocking with volunteers.

Nick Folkes, who organised the rally, denied the location — about 300m from Sydney’s famous Oxford Street strip — was significant. 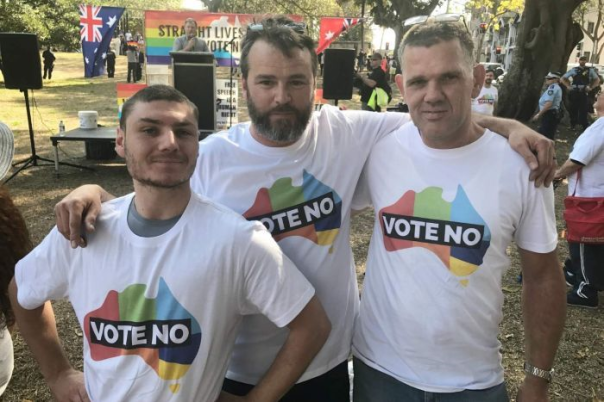 “Some people have said it’s provocative but we’re just exercising our democratic right to freedom of speech and freedom of location,” he said.

“I have real concerns about not just being about gay marriage, but a much broader agenda.

“We’re acting within the boundaries of law. I do believe we’ve got a right to be there, just as gay people have a right to be anywhere in support of their cause.”

Mr Folkes was a driving force behind a rally to commemorate the 10th anniversary of the Cronulla Riots in 2015.

New South Wales Police said there were no incidents at the event.

Same-sex marriage debate has reached fever pitch in the past weeks, as postal survey voting forms continue to be distributed by the Australian Bureau of Statistics.

Last weekend, a sign writer caused controversy by writing “Vote No” in the air three times over the Harbour City.

In Hobart, former prime minister Tony Abbott complained to police after allegedly being headbutted by someone wearing a “Yes” badge on Thursday night.

The alleged offender denied the incident had anything to do with same-sex marriage, stating: “I’m a lone anarchist that felt the need to headbutt Tony Abbott because I didn’t think it was an opportunity I’d get again”. from ABC