A pastor in Zimbabwe was eaten by crocodiles when he decided to emulate Jesus, and attempt to walk on water. The pastor was trying to recreate the infamous biblical legend, which has been called a miracle by some, but his choice of waterways led to his demise.

According to Zimbabwe Today, Jonathan Mthethwa with the Saint of the Last Days Church attempted to perform the feat in a water body nicknamed “Crocodile River.” The river is widely known for its infestation with the deadly reptiles. Witnesses said Mthethwa made it 100 feet before crocodiles viciously attacked the man. The pastor had walked out into the water and was attempting to rise from it when he was brutally attacked. 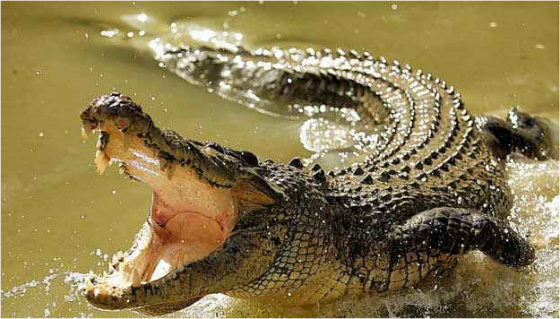 Pastor walks on water in Zimbabwe but crocs invite him to lunch, The only missing ingredient was a Green salad. They left his underpants floating on the river.

Deacon Nkosi, a church member, reportedly said, “They finished him in a couple of minutes. All that was left of him when they finished eating him is a pair of sandals and his underwear floating above the water.” Nkosi then said, “We still don’t understand how this happened because he fasted and prayed the whole week.” But the crocodiles made it obvious that they didn’t care much about the fasting beforehand. Emergency crews were on the scene within 30 of the initial attack, but it was all over by then. All they found was the single sandal and the underwear.

Before attempting the feat, Mthethwa brought his congregation to the river to witness his attempts to walk on water. Horrified members of the Saint of the Last Days Church said the pastor was completely devoured in a “couple of minutes”.

“The pastor taught us about faith on Sunday last week. He promised he would demonstrate his faith to us today, but he, unfortunately, ended up drowning and getting eaten by 3 large crocodiles in front of us,” said Deacon Nkosi.

It only took three crocodiles less than five minutes to completely consume a full grown man. But crocodile attacks happen often in Zimbabwe. Efforts have even been taken to reduce the number of crocodiles in certain waterways to protect people.

A police spokesman said, “This year we had too much rains and it is obvious crocodiles are certainly there in our rivers. Villagers should not risk their lives by swimming or trying to cross the flooded rivers.” It seems like common sense – to not try to walk on water in crocodile infested rivers. Tempting fate certainly isn’t for the faint of heart. Or those afraid of death.