The Queensland Government’s Farm Business Debt Mediation Act, which it is spruiking in a media release today, is a ruse to cover the fact it has completely failed to address the farm debt crisis.

“It’s another frightening example of a government putting ambulances at the bottom of the cliff,” Member for Mount Isa Robbie Katter said. 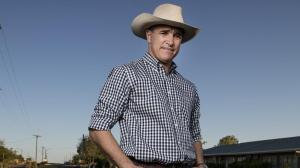 Robbie is warning people not to be fooled by the Government’s ‘solution’ which comes into play next month. “A farm debt mediation mechanism doesn’t solve the debt problem, it just means that when the farmer is finally completely crippled by debt, they can shut their business efficiently. It’s a complete slap in the face to the entire agriculture industry,” Robbie said.

In March this year, the government and LNP refused to support KAP’s Rural Debt Bill, which would have addressed the unsustainable levels of farm debt, which is bringing Queensland’s agriculture industry to its knees.

“Through the Rural Debt and Drought Taskforce that I chaired in this parliament, it was clear that the debt problem is massive and that a significant response from the Government was required to address it,” Robbie said.

“In 2015, I thought the Palaszczuk Government was serious about identifying solutions to address rural debt issues with the formation of a Rural Debt and Drought Taskforce. I was wrong. Just like the opposition they prefer to leave it to the market. This approach has delivered a declining sugar industry, a decimated dairy industry and some of the most expensive gas and electricity in the world.”

“Governments intervene in markets all the time. Between the Clean Energy Finance Corporation and the Australian Renewable Energy Agency, there’s about $5 billion worth of low-interest loans to help stimulate the industry. However, when it comes to supporting agriculture, and particularly family enterprises, the Government doesn’t want to touch it”.

“Instead of supporting KAP’s Rural Debt Bill, which was created off the back of extensive investigation and consultation, and would have made a real difference to fixing the rural debt problem, the government pushed through its mediation act to make it look like it was doing something,” Robbie said.

“It’s a disgrace. It’s just another example of how little the major parties care about anything that’s happening outside of Brisbane.”