The fallout from the 2016 acquisition of Springvale Station at Lakeland continues after the Queensland Department of Environment and Heritage Protection called for tenders to demolish a 1200 megalitre irrigation dam on the property.

Last year the EPH was caught out when a neighbour complained of long silt plumes found in the permanent East Normanby River after the department began siphoning water from the $400,000 dam into the river.

The river eventually drains into Princess Charlotte Bay and onto the Great Barrier Reef. 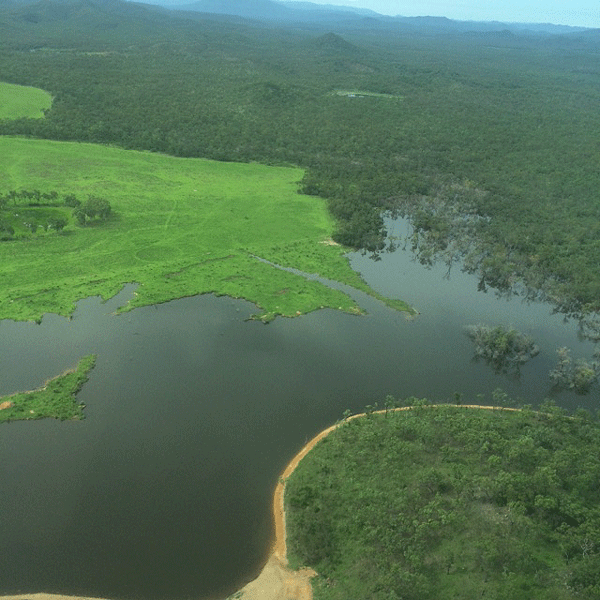 This massive irrigation dam costing $400,000 to construct will soon be bulldozed by EHP, by removing an estimated 30,000 cubic metres of earth in the wall. An engineer predicts this soil could eventually end up in the river system and be deposited onto the Great Barrier Reef.

The water was left to run across 150 metres of soil between the dam bank and the river, gouging one metre channels in the earth creating many hundreds of tonnes of sediment which flowed into the river.

A local engineer estimated the wall would contain 30,000 cubic metres of compacted earth, when removed could eventually end up in the river system.

The hydrologist who designed the dam for the previous owners said the dam wall was sound and in no way would have breached after heavy rain events.

The EHP Minister at the time, Stephen Miles, claimed the design of the dam’s construction was unknown and therefore considered the wall “unsafe.”

Refuting the Minister’s assertion, the hydrologist, Geoff Benjamin, of Mareeba, said the wall remained intact and sound after 300 mm fell in one night, before the wall construction was finally completed.

“The dam was designed with an effective spillway and fish-way, however construction work was forced to cease due to early wet-season rains,” Mr Benjamin said.

“Although I did not visit the site when work ceased, I believe that the embankment height was about 1 to 1.5 m below the intended final design elevation.

“At this elevation a natural depression on the eastern side provides a broad, natural spillway so that the embankment would not be compromised in the event of intense storm run-off; which is in fact, exactly what occurred when Cyclone Etta, I think, passed straight over the property in January 2014, reportedly dropping about 300 mm of rain over-night!

“The statement about ‘unacceptable safety risk’ would therefore seem totally baseless.  Unfortunately such uninformed, alarmist comments seem to be what we’ve come to expect from this particular Minister.”

Defending the decision to demolish the valuable water asset, home to innumerable birdlife and other aquatic wildlife, the EHP claimed the design was unknown, which has been ridiculed by Mr Benjamin.

“Likewise the assertion that ‘the status of its design and capacity is unknown’ is inaccurate, since I provided details of the design to one of the Minister’s departmental officers not long after EHP acquired the Springvale property,” Mr Benjamin said.

The EHP claimed it acquired Springvale to prevent sediment runoff into the Great Barrier Reef catchment, however the Chief Scientist for Queensland, Dr Geoff Garrett, told a meeting of landowners at Lakeland prior to the property purchase there was no measurable sediment runoff from the Upper Normanby catchment.

Minister Miles ignored this advice and continued with the purchase, wasting $7 million of taxpayers funds and removed 4000 head of cattle from the local economy.

The property is being divided into yet more unnecessary national park with the balance being given to an indigenous group.

Tenders to decommission the dam were called on January 24 and will close on March 5, 2018.