Australia should follow the Republican Member’s example. It seems In Australia we have all the same problems.

The shortest Draft Bill in Unites States history has been introduced by Congressman Thomas Massie ( R – Kentucky) to terminate the federal Department of Education.

The Bill: “The Department of Education shall terminate on December 31, 2018.”

H.R. 899 will end the destruction of America’s education system.

H.R. 899 should have been introduced 37 years ago. But no Republican has had the courage to do the right thing in all those years – until now. 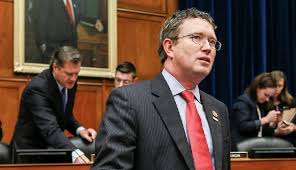 Congressman Thomas Massie intends to terminate the Department of Education on December 31, 2018

The American Policy Center  will personally deliver your signed petition(link below) to Congressman Massie so that he may display yours and thousands more to show Congress the American people demand an end to the federal Department of Education.

This is what you and I have been waiting for. It’s the end of the federal government messing with the minds of our children, indoctrinating themwith leftist propaganda. The end of Common Core!

The end of the power of the National Education Association (NEA) the most powerful union in the nation – and the one that directly affects your child’s future! These programs and policies are the NEA’s agenda: Goals 2000, School to Work, Workforce Development Boards, pumping drugs like Ritalin into our children. And now today – Common Core.

Classrooms are torturing your children with idiotic programs like CommonCore where the questions make no sense – defy logic and cause them to quit.

American history has been removed. Instead of learning about the Declaration of Independence the children have been indoctrinated to accept the UN’s Declaration on Human Rights.

Academics have nearly disappeared from the classroom and the children are pummeled with propagandaon global warming. The Department of Education’s policy is to determine that your children are sick if they believe intheir nation as a bastion of freedom.

Or if they love God and their families. As a result of 38 years of the Department of Education our children have been successfully turnedinto ignorant, pliable global village idiots! Does that sound harsh?

Then take a good look around you. Look at the surge of young people who unquestioningly supportedavowed Socialist Bernie Sanders for president.

Look at the sick images of college students who need counseling and coloring books to deal with anyone who expresses opinions other than those deemed to be politically correct by the Education establishment.

<http://americanpolicy.us1.list-manage.com/track/click?u=3af5d41d21ad9fce53c86ba9d&id=9b11aef6e3&e=cf466a8b6f> US PETITION TO: TERMINATE THE DEPARTMENT OF EDUCATION