It is not difficult to put the case that their values clearly do not synchronize with the environmentalist ideology being pushed on Australians under the so-called 2030 Sustainable Development Goals i.e. Agenda 20-30, which is subscribed to by Australia’s Department of Foreign Affairs and Trade, state governments and councils. 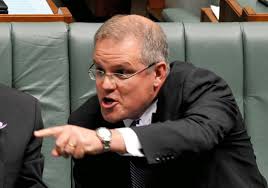 Will Scott Morrison claw back the $444m Turnbull handed to the GBRF of which his wife is patron?

Running parallel to this is the cultural Marxism as recognised in programs such as “Safe Schools” and the “diversity” agenda being pushed by governments, corporations and big sporting codes.
The so-called sustainable development goals in many ways are actually anti-economic development. They supposedly justify the creation of elitist qangos like the Great Barrier Reef Foundation (GBRF) to guide the unwashed masses into the supposed green, diverse global utopia.
The GBRF, with its six employees, was recently given an outrageous handout of $487.6 million by ex-PM Turnbull through then Environment Minister Frydenberg. Of course it’s not all for the employees, but to be dished out to any number of projects that supposedly do something to “save the reef from destruction”.
The sham is that some scientists who have long observed and studied the reef say it is not in danger of dying at all.

The handout would have to rate as one of, if not the biggest environmental rort in Australian history – close to the $460m spooned out to the horrifically crooked Clinton Foundation and associated entities by both Labor and Coalition governments.

The question is, can Morrison and Frydenberg, the Christian-Jewish duo, do something to break the oppressive grip of green-tinged cultural Marxism over Australia?
Both should readily understand the disconnect between their respective beliefs and the philosophy behind Agenda 20-30.
The Old Testament story common to both Judaism and Christianity tells of the earth and mankind being created by a supernatural God of infinite wisdom and love, who put mankind in charge of the planet with instructions (Genesis 1:28) to “Be fruitful, and multiply, and replenish (or fill) the earth, and subdue it: and have dominion over the fish of the sea, and over the fowl of the air, and over every living thing that moveth upon the earth”. The Commonwealth of Australian, through the English law tradition, has been and hopefully still is guided by Christianity and the “Almighty God” referred to in the Preamble to the Constitution.

This tradition recognises The Lord’s Prayer as a spiritual principle for the good government of the nation, hence it being a voluntary part of the parliamentary procedure – even if large numbers of MPs these days reject it.

But environmentalists mostly do not accept the existence of a God who is ultimately in control of the planet. If they are open to any spirituality at all, it’s the idea of a pagan spiritual entity called Gaia, the Mother Earth goddess of Greek mythology.

But there are also many atheistic or agnostic environmentalists who claim to be solely led by “science”, which for them has no place for spiritual entities, faith or a Creator. Their explanation for the existence of all things is the shaky theory of evolution, which is supposedly proven by science.
For those unconvinced either way on this matter, look up a lecture on YouTube by the late Chuck Missler, a former industrial engineer, who explains how Darwin’s “simple cell” theory, taught in high school classes as the basis of evolution, has now been totally disproven by modern science.

Science, rather than pointing to random, chance mutations as being the answer to life as we know it, now points to intelligent design in nature.

Where, we might ask, did this design, this highly ordered and complex information come from?

Those of faith might also ask, did the God of creation miscalculate the ability of the planet to sustain an ever-growing population or the ability of those “made in His likeness” to find technology in order to inhabit the vast, unpopulated regions and oceans of the earth and eventually, other planets.

Environmentalism, by contrast, says the human species as an imposition upon “nature” or “Gaia”.

Humans, they maintain, are causing nature to fail and Gaia to spin out of control in apocalyptic climate change, therefore humans must reduce their numbers and radically cut their economic activity.
Ideally, according to this global green ideology, we should be living in cubicles in high-rises covered in vines with little or no electricity, apart from that which solar panels or windmills can dribble in.
It’s a miserable outlook for humanity, otherwise known as cultural pessimism.

Whether a Christian and Jew in charge of Australia’s governing Coalition party, can throw off this dark cloud over the nation, has yet to be seen.