People in Hughenden will be forced to drive 250km to access full ANZ banking services, with the big bank announcing it will close its Hughenden branch.

Member for Mount Isa Robbie Katter said it is just another example of big corporations focusing on profits rather than customers, services and communities.

“I think that big corporates like ANZ have a social responsibility to provide services to towns like Hughenden, even if that particular branch doesn’t generate a lot of money,” Robbie said.

“We are talking about a company that reported a first half year cash profit of $3.4 billion just a couple of months ago. They cannot argue that keeping the Hughenden branch open will cripple their business. But losing services like this in regional Queensland cripples communities.” 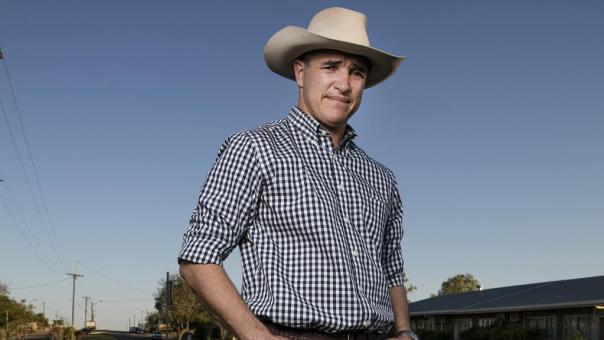 In a statement about the branch closure, ANZ told its customers they could travel to Charters Towers for their banking needs.“What a joke,” Robbie said. “The city people making these decisions complain if they have to spend an extra 10 minutes in peak hour traffic. Now they want people to drive 250km to go to the bank. ANZ obviously doesn’t care about its customers outside of the city.”

“It’s not just services that the community is losing, this is two jobs that will be lost. Every job counts. Unemployment is already sky high in rural and regional Queensland. Youth unemployment in outback Queensland is currently at 56.2 per cent. Plus these job losses come on the back of Aurizon railway sacking workers which hit Hughenden hard.”

“We have big plans for this region, with the abattoir proposal, irrigation proposals and renewable energy developments. It’s alright for these banks to take big profits in the good times. As soon as the dollar signs disappear they take their bat and ball and go home.”

“We hope that people in Western areas remember what ANZ is doing here. This could mean a lot more to ANZ than just losing business in Hughenden. This is stain on their treatment of people in Western Queensland.”

“Suncorp stuck by Julia Creek and went in there when a bank pulled out. It’s sickening that huge corporates like ANZ with mega profits just walk away from rural and regional Australia and hang them out to dry.”

Federal Member for Kennedy Bob Katter said: “Let the people of the North Qld mid-west know that the Labor Government deregulated the wool industry, and we lost around 700 jobs.  Under the Liberal’s National Competition Policy and the acquiescence of the Labor State Government the railways.  The Liberal Government privatised Telstra and sold off the State bank taking away 200 jobs.  Under the corporatisation and deregulation of Ergon by Labor we lost nearly 600 jobs.  Let’s face it the Liberals would have done all of those things faster,” Bob Katter said.

“With the ANZ Bank Hughenden Bank closure, the reality is we have got no one there to serve us.  I think the KAP policy to take 1.7% of the water by law, will almost certainly see HIDCO become a reality. The Hann Highway should be completed under the present program by 1-2 years.  We are working intensely on the Big Kennedy wind farm and with HIDCO’s irrigation there will be a quartering works and maybe a meatworks in Hughenden.”

“These things are not happening, they are being MADE to happen by a very tough local leadership, who are setting an example for all of inland Australia.”