KAP Federal Member for Kennedy Bob Katter flanked hundreds of First Australians at a roadblock outside Yarrabah (20 klms south Cairns)  today to protest the State Government’s continued “lock down” of Indigenous communities, labelling the rule a case of “brutal paternalism”.

The demonstration follows weeks of turbulent behaviour in the communities including rioting in Aurukun, demonstrations at Yarrabah and the jailing of Doomadgee residents.

The indigenous community of Yarrahbah, 20 klm south Cairns in is uproar over being locked up for two months by a power-hungry Labor Premier. Federal Member Bob Katter took to the streets with them today in defiance of nonsensical ‘social distancing’.  There are no cases of Coronavirus in the Far North.

“This is outrageous overkill. It is just another exercise in power not an effort to look after us.

“If it’s to look after us, then where are the market gardens that were promised to me 18 months ago? Why did you send an infected person from Brisbane into the Cairns Base Hospital?

“What you are seeing here is the abrogation of our freedoms and the people enforcing this rule are sick and drunk with power.  The health fascists are running amok and it’s about time politicians step up and I pray that the people hold the politicians to account if they don’t.”

Mr Katter said that hundreds of demonstrators met at the border carrying posters and banners and shouting for ‘freedom’ whilst being supervised by police.

He warned it would only get worse.

“There has been extreme rioting in Aurukun, screaming from Palm Island and Doomadgee is getting close to exploding.

“I’ve been told that there is a young man in a Gulf community who was informed by his doctor that he had to go to Brisbane for an operation or he would die. When he asked the authorities if he could return, he was told he wasn’t allowed. He was told it would be for an unknown amount of time and so he chose to stay, and he died.

“In Yarrabah they can’t get shoes, underwear or warm blankets. They can’t renew their registration or fix their cars.  So why are these people locked up?!

“It’s the regime of brutal paternalism returned. It took us 150 years to get the Act abolished. And now it is back again.”

For 15 years or more the high-fliers of the Aboriginal industry have been trying to get their hands on the enormous mineral wealth of Cape York Peninsula.

Proven deposits of bauxite, coal, uranium, rare earth, silica, diamonds and gold have been eyed off by miners and banks since an aerial survey of the Peninsula’s natural wealth was undertaken by an American company circa 2003.

The 121,100 square klm land area of Cape York Peninsula has a population of about 8000 of which 3300 are miners living with their families in Weipa.

About 20 per cent of this number living near Weipa are Aborigines.  Other than a handful of pastoralists, the remainder of Peninsula inhabitants identify as indigenous.

Along came Coronavirus, which has now proven to be a virulent strain of the common flu, so authorities, fearing for a vulnerable Aboriginal population of 5000 scattered across 17 communities situated along the east and west coastline, closed down the Peninsula. The closure will prove to be a windfall for the Cape York Land Council and Cook Shire Council.

The Queensland Labor Government which is highly dependent on the welfare vote to keep a Labor member in the Cook electorate, panders to every wish of the Aboriginal community. 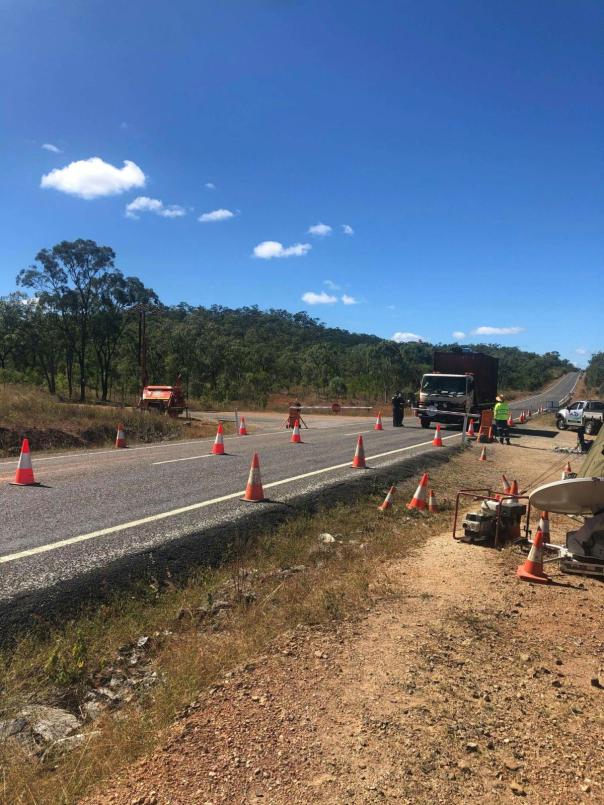 A permanent military and police checkpoint has been established at Spring Hill Station, 110 klm north of Mareeba, which personnel say will be there for the next 12 months or until a vaccine is produced, purportedly to protect the indigenous population.

Another permanent military checkpoint has been stationed at Chillagoe to the west of Mareeba.

Cairnsnews has published much scientific data from internationally acclaimed virologists and biologists who maintain the virus, which is causing lung problems in victims has never been isolated from the 36 sub-strains of Coronavirus.

Therefore, as the Chief Medical Officer, Dr Brendan Murphy has stated, no vaccine will be available under 18 months, if ever.

Cairnsnews has been told by indigenous residents of the Peninsula they won’t be tolerating another 12 months of being locked up and will be traveling by road or air to Cairns or elsewhere whenever they like and returning home  just as they have done for a generation.

So far the evidence shows they care little for the nonsensical ‘social distancing’ or ‘self -isolation’ terminology coined by the UN and parroted by leaders across the world reading from the Global Preparedness Monitoring Board (WHO) script.

Already the Aboriginal community of Yarrabah, 20 klms south of Cairns has revolted over their lockdown, staging at least two community protests.

While Aborigines are protesting the lock down at Yarrabah from where residents can walk to Cairns, the potential for Aurukun-styled riots is already rearing its head across the north and into the Gulf..

The rules for exiting the Peninsula are quite simple but if you want to return then you must self-isolate for two weeks at home after re-entry and this isolation will be monitored by police or health officials.

The checkpoint police closely scrutinise your entry papers issued after an online application to the Cook Shire Disaster Management Group. Police will not allow anyone enter the no-go zone under any circumstances if you don’t qualify. Particularly, it seems if you are white and a pastoralist. There are reports that indigenous people are not heavily scrutinised before entering.

Checkpoint guards photograph you, your vehicle, search your vehicle and rigorously check your papers.  The army and police have each set up permanent communication posts at the checkpoint with accommodation dongas and water supply tanks. There is no mobile phone service at the site.

Army Reservists with a sprinkling of regulars man the site around the clock with police drawn from Brisbane and elsewhere, understandably much to the ire of local officers. Extremely generous camping-out and meal allowances are a big drawcard for city officers.

At Bamaga in the Northern Peninsula Area private security guards are patrolling the communities on the lookout for interlopers from the Torres Strait.

Meanwhile the mineral wealth lays in situ waiting for exploitation.

The Aboriginal Cape York Land Council two years ago filed Number 1 Claim over the entire Cape York land mass claiming all property not yet handed over to indigenous Prescribed Body Corporate groups and communities. This claim includes a number of white-owned pastoral holdings.

If successful in the Federal Court this claim will give the CYLC jurisdiction over some 60,000 square klms of mineral and pastoral wealth on the Peninsula above the 16th Parallel.  In light of their previous practices few Peninsula community members will benefit from the Number 1 Claim.

Permanent checkpoints with an indefinite life will suit the Aboriginal industry hierarchy allowing them exclusive access to the entire area which they claim as home and naturally the vast deposits of mineral wealth. Mining company personnel will not be allowed to enter under the existing rules.

If the Peninsula is reopened to the 100,000 tourist vehicles that visit every year, Cook Shire Council at Cooktown after agitating for a checkpoint for several years, said it will be charging a boom-gate toll for entry with specific permit routes and destinations.

Is it any wonder the Chinese have been trying to buy the Tip of Cape York?

Police have had enough. Youthful black criminals some as young as 13 are stealing late model cars from  homes in Cairns  at the rate of five a week.

The latest victim had his hire car, a Mitsibushi ASX, as well as his wallet and credit cards stolen from a relative’s Bentley Park residence.

The four teenagers in the stolen ASX then pulled up alongside a marked police car at Aeroglen, where officers were attending an accident. A stolen Nissan Micra had crashed into a police car after police deployed a tyre deflator. Four youths aged between 16 and 18 were detained by the dog squad.

Wayward black youths stole a Mitsubishi ASX then taunted police officers attending a crash site in Cairns involving another stolen car. Magistrates are too afraid of being labelled racist by the major media led by the ABC, should they take decisive action against these malcontents who are making life hell for Cairns’ residents.

The teenagers in the ASX openly taunted the officers, knowing they were unable to take any action, due to the Police Department’s no-pursuit policy.

The four youths, aged between 13 and 16, reportedly from the nearby coastal Aboriginal settlement of Yarrabah, soon after rolled and crashed the Mitsubishi hire car in Yarrabah.

They remain in hospital under police guard.

The day before black juvenile offenders, stole a luxury Lexus sedan and crashed it at Earlville after its 15 year old driver taunted police officers.

The hapless tourist who hired the ASX, Shane McCauley, of Toowoomba, now faces an insurance excess charge of $4000 because the car was written off.

He said the black youths had turned his happy family vacation into a nightmare.

“The financial burden it has put on us. We came up here on holidays and it has turned out to be a nightmare,” Mr McCauley told the Cairns Post.

“It wouldn’t bother me not to come back to North Queensland again.

“What a shit hole to put it bluntly.

“If I had a hammer I’d break their kneecaps.

“It would have been nice if the cops rang me. I haven’t got a no-pursuit policy.

“The magistrates really need to crack down on this.”

Cairns News in the past has reported several extremely contentious issues with Police Union president Ian Leavers, but at last he has come out in support of completely disillusioned Cairns police officers who have been doing their best to clean up the substantial element of indigenous offenders which have been giving law-abiding Aborigines a bad name.

Mr Leavers received a lot of public support for coming out to can fixed speed cameras which he said were doing nothing towards the road toll and were merely “revenue raisers.”

Cairns News fully supports Mr Leavers on these vital issues but could never share his opinion that only police officers should be allowed to own guns.