Clear and concise is this professional presentation with the use of “gumballs” explaining the bottom line of immigration failure so you may make informed decisions .

You might care to forward this video to your federal and state MP so they can understand how immigration “does not work” when next called to vote in the party room on your behalf !!!

September 3, 2013: Thewithdrawal of LNP advertisements from North Qld newspapers over legal concerns they break the law is cold comfort for voters who have been deliberately deceived by the LNP’s “a vote for Katter is a vote for Labor” scare campaign – many of whom have already voted.

“Whilst we welcome this courageous decision by our local Murdoch-owned regional newspapers – which is quite extraordinary given the context of their capital city counterparts’ unashamedly biased moonlighting for the LNP
on an unprecedented scale – it is too late for many voters who already believe the lies they have been force fed,” said KAP federal leader and Member for Kennedy Bob Katter today.

“They’re obviously readers of Hitler’s Mein Kampf: ‘If you tell a lie consistently and continuously then people will actually believe it’s the truth, even though it’s a lie’.”

The revelation that NewsCorp’s senior lawyers had torpedoed the final tranche of the LNP’s false “a vote for Katter is a vote for Labor” advertisements, follows yesterday’s announcement by Mr Katter outside the Supreme Court in Brisbane that the KAP had commenced legal action in line with Section 329 of the Commonwealth Electoral Act 1918, which prohibits “misleading or deceptive publications” during an election period.

Mr Katter said the KAP had resolved to take its own legal action after the rejection of complaints last week to the Australian Electoral Commission about billboards still in place today throughout the Kennedy electorate, which are emblazoned with the blatant lie that ‘a vote for Katter is a vote for Labor’ – and do not even carry an authorisation.

Mr Katter said the ferocity of the fear and misinformation campaign raised questions about the chief motives behind the attacks on “a little party like ours” given the opinion polls were predicting a landslide for the Liberals.

“This will be the first time ever that Australia will be run by the richest and most upper-class people in Australia,” warned Mr Katter.

“Mr Hockey and Mr Abbott’s electorates take in the most exclusive suburbs in Australia: the people who have taken all the benefits, the commissions and agency fees, from the sale of people’s assets – electricity utilities, railways, Telstra, and even our own homelands, our farms and stations, all sold to foreigners.

“Whilst Labor is finished in this election, the KAP provided the people’s protection. Smash us, and there’s no-one to protect the little bloke, the everyday average Australian family.”

But Mr Katter emphasised that the KAP would continue to “fight like tigers for the little bloke” despite the blistering attacks from a major party that believes it is born to rule.

“Their attitude is, ‘how dare we give preferences’ in one state out of six – which actually helps us get rid of the Greens,” said Mr Katter.

“They seem to think that we must be a rubber stamp for the Liberal Party – which is understandable since they demand, and get, this off their own Members of Parliament.”

Mr Katter said people in North Qld and across Australia who voted for rubber stamps “cannot complain when your country has no secondary industry, no agriculture, and our mining jobs have gone to foreign fly in workers”.

“For the patriots, we will fight on,” he vowed.

THINK HARD BEFORE YOU VOTE – LIBERALS ARE LIARS 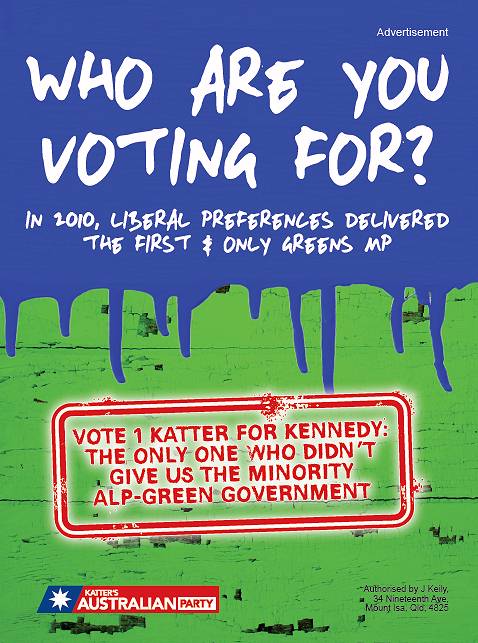 Just talking to Bob Katter he says the Libs are going to  get tough on guns and they will allow China to buy as much of our property as they wish. The Libs have agreed to let in 300,000 Asian 457 visa workers to take our jobs. In hindsight Vietnam was a waste of good men.

KAP is only preferencing Labor in four seats. Think about it. If KAP doesn’t control the senate there is no point in Katter running 100 candidates across the country. Our few preferences wont help Rudd at all-he is terminal even among the miners. ALP preferences most likely will help to get Blundell into the senate.

If we lose Bob and control of the senate then kiss agriculture goodbye.

Miners and Asian 457 visa workers will overrun the country and there will be even fewer jobs for our kids. This will be our last chance of turning around the unprecedented mess left to us by a two party system of government.-editor

Truth in humour, not rumour, during ‘dishonest’ campaign

The KAP today joined forces with a couple of colourful personalities to send a serious message to voters desperate for some truth in what is arguably the dirtiest election campaign in Australian history.

KAP Federal President, Member for Mount Isa Rob Katter, joined KAP Qld Leader and Member for Condamine, Ray Hopper, and Member for Dalrymple, Shane Knuth, to illustrate the KAP’s major party preference flows with glasses of milk signifying the percentage of seats in which the ALP or LNP were favoured over the other.

The red milk glass – about one-third full – demonstrated the percentage of Senate seats in which the KAP preferenced the ALP ahead of the LNP; whilst the blue milk glass – about two thirds full – showed where KAP gave the LNP the jump on the ALP.

Mr Katter said the party was forced to resort to such stunts to convey a message that was failing to cut through the personality-focussed election campaign, dubbed arguably the most dishonest in Australian history.

“It’s the sort of dirty politics which contributes to a record one-in-four Australians refusing to be forced to choose between the ALP/LNP duocracy that believes it’s born to rule,” said Mr Katter.

“Of course we all know the major parties have done their own preference deals with each other – such as the LNP preferencing Labor – because it’s in their best interests for Australia to be ruled by the duocracy. However history has shown that our outdated two-party system of government has proved in the worst interests of Australia and its people.”

Mr Hopper said the KAP had negotiated preference agreements with a clear focus: “To put our candidates in the best position to win seats in Parliament so we can be the people’s watchdog of our corporate-controlled major party governments – and get rid of the Greens puppeteers holding our country to ransom”.

But the major parties did not deserve anything from the KAP, said Mr Hopper – and the preference agreements were designed to do exactly that; to give them nothing but rather take seats away from them.

“The major parties are just different dogs with the same fleas – or different bananas in the same skin, as the case may be,” said Mr Hopper. “So we are effectively giving neither anything – because we are in fact poised to take seats from the ALP and LNP and become the third force in Australian politics.”

Mr Katter noted that whilst government is formed on the floor of the House of Representatives, the KAP’s strong showing in the 2010 Qld election effectively handed the LNP about a dozen seats because the KAP cannibalised the ALP vote.

“So it’s crucial that Australians do not hand complete control of both the House and the Senate to any major party to rubber stamp any decision they like – nor keep the Greens calling the tune. As such, the KAP negotiated preferences that put our candidates in pole position to be the people’s voice in Parliament against the ALP-LNP ‘corporation’ that’s destroyed industry and opportunity in Australia and taken voters for granted.”

The KAP’s finalised preference agreements, being made on a candidate-by-candidate basis in line with the party’s core values and principles, are near completion and will be declared in full in due course. 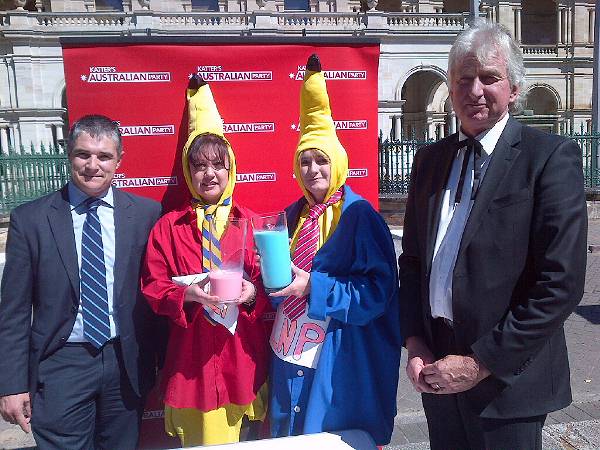 ABC Radio hung up on gay marriage-Katter not interested

Soon we will be paying double for our own gas, ignored by LNP

Remember readers the Liberal Party and the Labor Party are owned lock, stock and barrel by the gas and oil companies

15 August 2103: KAP Federal Leader and Member for Kennedy Bob Katter has challenged the would-be major party governments to prioritise the Australian people over profits for multinational resource giants and commit to reserving a percentage of Australia’s gas for domestic use.

“This is a matter of national significance that should be front and centre in this election campaign, but don’t expect the major parties to bite the hand of the largely foreign-owned industry that feeds them,” he said.

Mr Katter said it was commonly accepted that Australian consumers can expect to four times current prices, to equal those paid by foreign buyers who are set to access the multi-billion-dollar liquification plants off Gladstone from 2014/15.

This means not only a significant cost-of-living slug to households, but also risks the viability of industries across Australia – from manufacturing to mining and food processing to fertiliser plants – which rely on gas to fuel their intensive energy needs, said Mr Katter.

“They’re writing contracts right now in terms of $9 a gigajoule up from $2-$3 a gigajoule,” warned Mr Katter after industry meetings in Mount Isa this week.

Mr Katter said base costs would explode Mount Isa – the hub of the world-class North West Minerals Province – which is not connected to the National Electricity Grid and reliant on expensive gas or diesel-powered energy.

“Yet we have the LNP’s would-be resources and energy minister last week telling people in Mount Isa – where for the first time in nearly 100 years there’s no more processing of copper – that their future is in more gas.

“Areas like Mount Isa could be very hard hit. But our government has married us into gas and now we are held to ransom by the gas industry.

“You only have to follow the money trail – now the federal LNP has refused to commit to $330m already on the table for the development of a nation-building clean energy corridor transmission link from Mount Isa-Townsville, and want more unconventional gas exploration instead.

“Just do the maths – it adds up to big profits for an industry almost entirely-owned by foreign interests and big losses for Australian householders and industries.

“The very least any responsible government would do as a basic duty of care to the country would be to safeguard people and industries by reserving some of the natural resources being exploited purely for the benefit of multinational corporations.”