← Global warming madness has peaked, now lets hope the extinction mob do become extinct, because the sane people of the world haven’t got problem
New film, Vaxxed 2 soon to screen in US, later Australia – will have big pharma in a frenzy →

Biggest ever farm protests in European history last week hidden by Australian media, and they are running a nation-wide campaign for government transparency?

Your advert and info of new book about Port Arthur which someone has just emailed to me. Google a book titled, CHRISTCHURCH MASSACRE: SATANISM & JOHN PODESTA posted on “Genuine Christianity” website in USA. 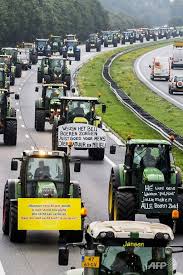 Netherlands farmers protest in style leaving placid Australian farmers for dead, in case they upset the inept National Party. Who knows one day Aussie farmers might grow a brain alongside their insecticide-filled cauliflowers.

Also, although a different subject, which may be of interest to you, right now the NZ Government in collaboration with the Netherlands Government is trying to URGENTLY close down all pastoral farming with new draconian ‘Climate Change’ fresh water and environmental regulations (under UN Agenda 21 which they never mention) which will put most farmers out of business.

The Dutch farmers are awake to the seriousness of these UN Green fascist proposals and have been holding the biggest farming protests in Europe’s history the past two weeks, but the news of this has been totally censored by the mainstream media in NZ, hence our farmers still are doing virtually nothing to oppose the proposals. You know the apathetic old story down under, “She’ll be right mate!” Google “YouTube – Netherlands farmers protest 16 October, 2019.” Another massive protest is planned for next week. Appreciate your work. Jack N.Z.

← Global warming madness has peaked, now lets hope the extinction mob do become extinct, because the sane people of the world haven’t got problem
New film, Vaxxed 2 soon to screen in US, later Australia – will have big pharma in a frenzy →