The Katters Australian Party says there needs to be serious legislative reform to ensure people are safe in North Queensland waters and our tourism industry continues to thrive.

Queensland politicians who do not support responsible culling and other control measures of sharks and crocodiles in North Queensland prior to this summer run the risk of having blood on their hands and this week’s shark attacks off the Whitsundays serve as a warning.

While the Labor and Liberal Parties combine to allow crocodile attacks, sharks have started eating people. Two savage shark attacks in the Whitsunday Islands North Qld this week have left a young girl and a woman fighting for their lives.

Robbie Katter, State Leader of the KAP and Member for Traeger says North Queenslanders are demanding action from their politicians because they know firsthand that a shark or crocodile attack or fatality is a fact of life.

As Queenslanders head into summer, Mr Katter wants the Government to place the same importance on crocodile fatalities as it does on shark attacks.

“I hope that this week’s tragic shark attacks reinforce the risks posed by uncontrolled populations of large predators particularly sharks and crocodiles.

“Based on the latest figures a total of 35% of crocodile attacks have proven fatal while 8% of shark attacks are fatal.  In the past three years in Queensland, there have been nine recorded croc attacks in North Queensland, with three fatalities.

Shane Knuth of the KAP has re-introduced the Safer Waterways Bill into the Queensland Parliament to try and legislate for responsible culling of crocodiles and create new industries in North Queensland, particularly for Indigenous communities.

Robbie Katter says the major parties have worked together in the past to block the passage of the important reforms.

“In 2017 Labor and the LNP blocked debate on the Bill.

“Any politician who doesn’t support the changes is not only putting people’s lives at risk, they are putting the boot into our tourism industry,” Mr Katter said today. 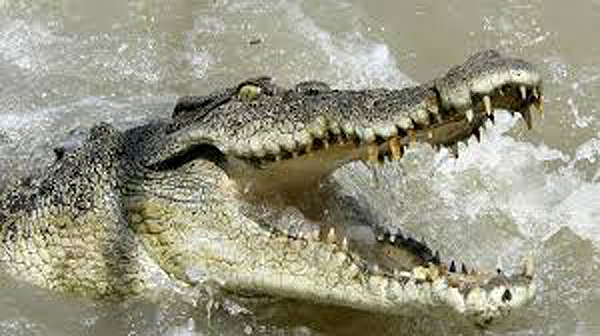 North Queensland tourism lives up to its motto: “Tropical bliss, safe one day, get eaten the next”

“Every day we hear stories from North Queenslanders about close encounters with sharks and crocs and the more this happens the worse it is for our tourism industry.

“Only a sensible cull will help solve the problem.”

The Bill seeks to establish a Queensland Crocodile Authority to oversee responsible culling of crocodiles and to grow a crocodile industry in the North, worth potentially tens of millions of dollars.

“We want this new Authority to unleash the potential of the crocodile industry and turn it into something that Queensland can be proud of.

“Meat and skin production and tourism can all benefit from the establishment of a Queensland Crocodile Authority whilst at the same time, ensuring that wild crocodile numbers are kept in check and rogue crocs are either killed or relocated.”

Mr Katter said that livestock and farm animal crocodile kills were on the increase in the North. Under the Safer Waterways Bill, farmers would have the right to introduce crocodile management schemes on their own land.

“As we head into summer, surf life savers, water ski enthusiasts, divers, rowers and the public in general in North Queensland are very concerned about shark and croc numbers venturing into our waterways.

“We have a responsibility – just like we do with shark numbers – to protect the public.  As someone said in my electorate, we want to cull the crocs to stop them culling us.”