By US correspondent Alex Bruce

Countering the flood of news reports stemming from statements made by Congressman Adam Schiff on Monday, DNI John Ratcliffe announced that the Hunter Biden hard drives were not connected to a Russian disinformation effort and that the FBI was in possession of and investigating the hard drives.

The FBI’s response to Ratcliffe’s statement was a refusal to confirm or deny the existence of an investigation. Former DNI James Clapper then repeated the Russia disinformation claims of Schiff, along with 50 retired intelligence officials, who wrote a public letter, saying they were “deeply suspicious” that Russia could be involved with the dubious New York Post stories, which had “all the classic earmarks of a Russian information operation.” 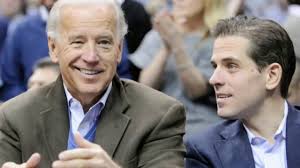 Joe Biden with son Hunter. Communist China set up Hunter over a number of years with underage girls and filmed it. Hunter left it on his hard drive when handed in for repairs. Hunter Biden’s signature appears on the repair invoice.

These fraudulent claims on behalf of the intelligence community, amplified by the Mainstream Media, together with the unprecedented social media censorship of the story left those of us following it with a queasy sense that the Deep State was ratcheting-up the insurrection.

It was only after Rudy Giuliani and former New York City Police Commissioner Bernie Kerik met Monday with Delaware State Police and turned over hard drives with numerous pictures of underage girls on it that the FBI and DOJ finally concurred with Ratcliffe’s statement.

Lee Stranahan predicts that now that the element of an underage girl – and potentially that of incest – has been officially introduced into the hard drive narrative by Giuliani and Kerik, this will dramatically shift the position of the Democrats and the Establishment media.

According to Stranahan’s experience with Anthony Weiner’s laptop, the element of child sex abuse is so toxic, that it will vaporize Biden’s Establishment support and it will be the death knell of his presidential bid.

The first half of this video from China Insider focuses on the Hunter Biden laptop scandal and it highlights the role of the China Entrepreneur Club, which has been dubbed “A second foreign ministry” for the Chinese Communist Party. China Entrepreneur Club leadership consists of numerous senior members of the CCP, including Wang Zhongyu, Ma Weihua and Jiang Xipei.

Chinese scholar, Hue Chi describes Hunter Biden as almost a victim of “the CCP’s long-term deliberate pursuit and seduction,” and that as a result of similar campaigns, Hue says, “It’s not only Biden’s son but many politicians in the United States have unclear relations with the CCP.”

The video also covers the report by Peter Schweizer, who was granted access to the email account of Hunter Biden associate, Bevan Cooney, who’s incarcerated in Federal prison for his involvement in a 2016 bond fraud investment scheme. Cooney says he was scapegoated, whereas his partners, Devon Archer and Hunter Biden evaded the law. However, Archer just lost the appeal on his fraud conviction two weeks ago and awaits sentencing. (Where’s Hunter?)

Schweizer says that Cooney’s emails lay out in detail how the Vice President’s son and his colleagues used their access to the Obama-Biden administration to arrange private meetings for potential foreign clients and investors at the highest levels in the White House. Schweizer has emails that show that Hunter Biden’s $1.5 Billion deal was done at the US Embassy in Beijing.

There was late-breaking news Tuesday night that Cooney had been moved from the Oregon Federal facility, where he was being held, reportedly, for his own security.

Rudy Giuliani was on Newsmax, describing text messages found on the laptop between Hunter and his father, Joe Biden about claims that he had acted inappropriately around an unnamed 14-year-old girl. Giuliani provided a screenshot of the text message, in which Hunter stated:

“She she told my therapist that I was sexually inappropriate with [redacted] when she says that I FaceTime naked with her and the reason I can’t have her out to see me is because I’ll walk around naked smoking crack talking [redacted] girls on FaceTime. When she was pressed, she said that [redacted] never said anything like that but the bottom line is that I create and caused a very unsafe environment for the kids…”

Giuliani also claimed there were numerous pictures of underage girls on the Hunter Biden hard drive and that the images were so disturbing that he and former New York City Police Commissioner Bernie Kerik met Monday with Delaware State Police and turned over their evidence.

Giuliani said, “We’re very uncomfortable with the fact that these underage girls were not protected. If you were to look at the photographs on this hard drive and didn’t report it to the police – well, if you were a law enforcement officer, you’d be guilty of a felony.”

And speaking of people who’ve had this hard drive for nearly a year, journalist Adam Housley has received reports from “Multiple FBI sources…The FBI investigation into the laptop has been ongoing since December of 2019…there’s a lot going on behind the scenes. A lot. There is a massive amount of info.

“From multiple agents: They knew right away it wasn’t a Russia operation. It went right to the top of the FBI because a Biden name was attached. That’s normal with any well known name. The question that needs asking, why wasn’t any info about Russia/Ukraine shared with Congress?”\