The Labor Member for Cook, Cynthia Lui, from Yam Island in the Torres Strait, is urging northern recreational anglers to record their catches.

In the Cairns Post ‘Household Fish Quiz’ Cynthia is asking weekend fishermen to make and send these records to the Fisheries Department so they can collate the numbers and species being landed.

Any fisherman who falls for this entrapment would be a complete fool. 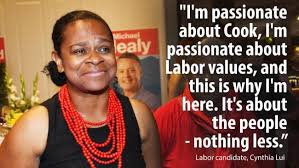 North Qldrs will not forget comrade Cynthia Lui deserted her Cook electorate office in Mareeba for Cairns, where she now ‘performs’ her functions from the Cairns office of Labor member Michael Healy.

By hook, line or sinker Cynthia’s carefully woven spider web is enticing you to tell big brother about your catch so the Marxists of the State Labor Government can introduce much tougher legislation to regulate amateur and sports fishermen.

Look at what the Labor Government has just done to the professional fishing fleet.

The hard pressed fishermen of the local fleet have been forced to spend thousands to install GPS devices which record their vessel’s every movement in real time even if crossing a ‘Green’ area to get to regulated fishing grounds.

The Department of Agriculture and Fisheries intends to make fishmeal of those few struggling commercial fishermen left in the north.

Up and up will go the cost of ‘fishing licences’ (and fish) and soon you will need a licence to buy a rod or hook.

We urge all fishermen, commercial or amateur to revolt against the fascist Queensland Government. There is not a court of competent jurisdiction in Australia.

Read senator-in-exile Rod Culleton’s foray into the UK court system which has systematically overturned any authority of an Australian court which functions under the fictitious ‘Queen of Australia.’

Don’t fall for it Queensland fishermen. Never ever vote for the communists of the ALP! – contributed by a recreational fisherman