← Citizens File $60 Million Suit Against Government Failure to Respond to Chemtrails Questions
What happened to the pension fund? →

Big Clive can’t afford to pay for any more elections 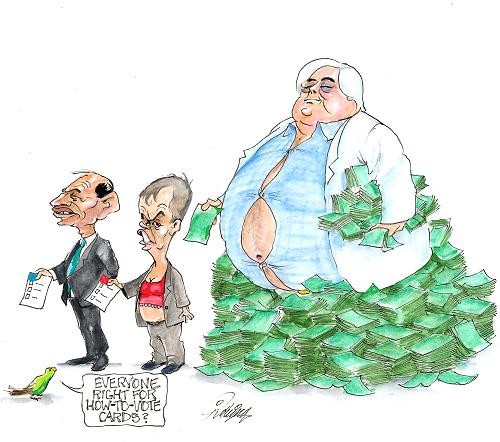 Big Clive is on the ropes. His Sino iron ore project in Western Australia has all but collapsed leaving Chinese partner Citec holding the bag for more than $1 billion. Iron ore has slumped to about $50 a tonne and going down, down, down.

The same company has Clive in court for borrowing $12 million from the joint account to pay for the federal election. He has only one senator left.

Keep your nose out Clive, you are just a spoiler. You got rid of ‘Campbell can’t do’ so leave the poor deluded electors alone and do something constructive for your country.

← Citizens File $60 Million Suit Against Government Failure to Respond to Chemtrails Questions
What happened to the pension fund? →