Baseball bats, buckets of tar and feathers from battery hens will be in line for 700 anti-coal mine protestors when they arrive in the Central Western Queensland township of Clermont.

Led by failed former Greens leader and Tasmanian Bob Brown, the rent-a-crowd convoy plans to arrive in Clermont on April 28 to rally against the Adani coal mine. 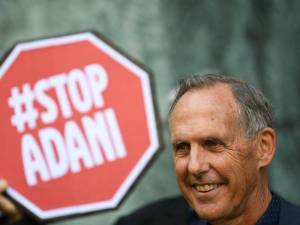 Bob Brown and the anti-coal mining knuckle draggers can expect a warm reception at Clermont.

Emotions are running high in the Central Highlands about ‘Mexicans’ infesting Queensland with their “nonsense of climate change and wrecking the Barrier Reef by coal mining,” according to Rockhampton-based mine supplier Stephan Hall.

“There will be hundreds of miners, contractors, ringers and truckies and people from local towns waiting to give these knuckle draggers a nice reception.

“I have heard of people taking baseball bats and other things to give the unemployed bludgers and their rabble something to remember that coal miners won’t be f….d about by these grubs,” Mr Hall said.

Clermont hoteliers and food suppliers have warned the protestors they are not welcome in Clermont and would not be served any food while in the township.

“When the Emerald mine closed the town was broke in a week and the same will happen to Rocky, Mackay and Clermont. Nearly every cattle property around here has a family member who works in a mine and the ringers will give them a big touch up.

“They will leave Queensland covered in tar and feathers. Bob Brown, the Greens, Labor and their poofter mates can go screw themselves not us!” he exclaimed.