The ongoing lies of Ann Leahy must be addressed. The Member for Warrego goes on like a broken record with her false claims the KAP preferenced Labor over the LNP at the last election. A simple fact check by visiting the Electoral Commission Queensland website, where all how to vote cards from the last election are recorded, puts Ann Leahy’s favourite fantasy to bed and exposes her willingness to deceive the public. Clearly the 22 LNP staff just aren’t enough when it comes to undertaking a simple fact check. I have requested a meeting with Ms Leahy so I can assist her on how to read how to vote cards.

Ann Leahy’s lies have again caught up to her this time she claims KAP preferenced the ALP at the last state election. The poor silly woman should take reading and comprehension lessons. She would discover KAP voters have the option of preferencing either ALP or Liberals, in contrast to the Liberals which preferenced the ALP in several seats.

As far as her reference to the KAP undertaking a ‘sweet heart deal’ with Labor at the previous Parliament, the Member for Warrego forgot to mention the fact the LNP also offered this so-called‘ sweet heart deal’ to the KAP. It’s also important to remember it was Peter Wellington who gave Labor government, not the KAP.

Ann Leahy receives $60,000 a year over and above her MP entitlement – for being an opposition spokeswoman. Apparently this isn’t even enough for get together facts right, but it is enough for her to spend a huge amount of time attacking the KAP rather than the government. Nice work if you can get it Ann. Being so flush with cash it would only be fair to highlight what Ms Leahy has done for her electorate and regional Queensland. Well, we all know not a single LNP member has introduced a Private Member’s Bill in this Parliament.

However, Ms Leahy did attend a hearing of an estimates committee that wasn’t her own in Brisbane and achieved…absolutely nothing. While she was busy achieving nothing in Brisbane, KAP members were out in our electorates. Of course it is a matter of record that the KAP, with support from Billy Gordon, blocked the Labor government’s vegetation management laws in the previous parliament.

Ann Leahy’s only impact on Queensland has been to ensure other regional MPs lost four staff and reduced their ability to help regional Queenslanders. The LNP’s voting record on rural issues, rather than the KAP, has been more closely aligned with the Labor Government such as the Dairy Bill, Rural Development Bank and the Budget from the previous parliament. Well done Ann, regional Queensland salutes you for all of your great work.
-Rob Katter, Member for Traeger

In an overt threat to leader Robbie Katter’s political liberty, she has demanded he disown Anning’s call for a national referendum on immigration or she will remove his staff.

This blackmail has been rejected by legal opinion as unlawful and a direct threat to deny free speech to a member of parliament. 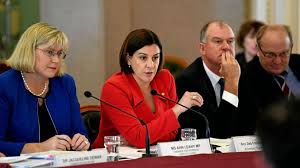 ,Robbie Katter has vowed his party will not bow to threats from the Queensland Labor Government and LNP to remove resources because they were ‘offended’ by comments made by KAP Senator Fraser Anning.

“Labor and LNP threats to remove KAP resources because of Fraser Anning’s comments are a fundamental attack on freedom of speech and diversity of representation in the Parliament,’’ he said.

“It is frightening to think that the major parties feel it is appropriate to threaten other MPs with punishment because they express an alternate view.

“From the LNP’s response to Senator Anning’s speech, it is now clear they have fallen in-line behind the politically correct Labor left.

“LNP member for Warrego, Ann Leahy, asked the Government to reduce KAP resources and the LNP endorsed Labor’s position on immigration when they supported a Labor motion in Parliament last Thursday.’’

Mr Katter has welcomed any review of the State KAP Members and staff performance so long as the LNP Opposition are subject to the same scrutiny.

“The facts are the KAP has three elected members in Parliament and we have introduced three private members Bills in this term, the LNP have 39 MPs and they haven’t introduced a single Bill,’’ he said.

“The KAP is the third largest party in the Queensland parliament but most people think we are the opposition.

“If Labor and the LNP want to try and threaten and intimidate us, I say bring it on.

“Queenslanders will not tolerate the blatant hypocrisy of Labor and the LNP working together to try and curb free speech and shut down debate on immigration”.

Meanwhile Katter warned the Premier and the Liberal MP Anne Leahy,  they are skating on thin legal ice and he has retaliated by seeking legal advice on a prosecution under Section 83.4 of the Criminal Code Act 1995.

Katter’s next move could see the Premier arrested and charged under 83.4, Interference with Political Rights and Duties, (1) (a) (b) (c) (d) which would prevent her from sitting in Parliament until the matter is dealt with in court.

If convicted the penalty is up to three years imprisonment.

Such a move would throw the ALP into disarray leaving the Deputy Premier Jackie Trad, the daughter of Lebanese immigrants, to take over as leader.

Queensland will rue the day should ‘mad Trad’ a rabid, self-confessed greenie lead the State.