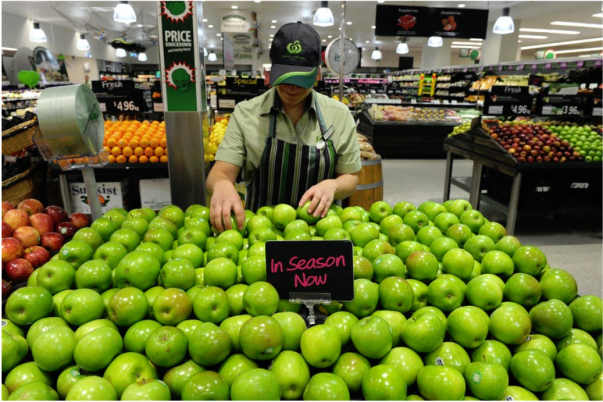 Woolies “The Freesh Food People” are now “Woolies the Fresh Data People” and are all on board with the COVID fascism being imposed by HSBC and their other big-bank shareholders.

By TONY MOBILIFONITIS
WOOLIES supermarkets have a “surprise” for you if you use their Everyday Rewards card. You could be ordered into self-isolation by a health bureaucrat for two weeks merely because a so-called “COVID case” attended the supermarket around the same time you did.

Too bad if neither you nor the “case” revealed by bogus PCR tests are showing any flu or cold-like symptoms, the fascist health bureaucrats will order you to “self isolate” for 14 days because that’s “the new normal”. Too bad also if you work or operate a business that requires you to be out of your home. Oh, but the new normal nanny state we’re sure has some sort of “COVID support” for you.

Using good old-fashioned cash and not using any so-called loyalty or credit card could spare you the inconvenience and assault against your basic liberties and rights because Woolies’ Everyday Rewards card data is shared with the government. This has been confirmed by a report in the Australian Financial Review.

According to a poster on the 2021 Awakening channel on Telegram, an SMS demand from the government to self-isolate after shopping at Woolies is exactly what his brother experienced. “My Brother who lives in Maroubra received an SMS last night from the Government that he had been identified shopping at Woolworths on Wednesday by using his credit card to pay for groceries and must self isolate with his wife for 14 days – because someone had tested postive shopping there,” he wrote.

“The incident time bubble they are using was not revealed.. could be over 1 day or many more. Hundreds of cars are turning up to the testing stations in panic. I asked him to look up whether there is a legal obligation to get tested and there isn’t, just strong coercive directions. He got his car out of the queue saying there is no legal obligation stated.”

Woolies is the largest company in Australia by revenue and the second-largest in New Zealand, the largest takeaway liquor-retailer in Australia and the largest hotel and gaming poker-machine operator in Australia. Woolworths launched its general purpose credit card in 2008 with HSBC named as its credit card partner. The Woolworths Everyday Money MasterCard allows customers to earn shopping cards redeemable at Woolworths group retailers. But now the truth about control by data is being revealed.

The Financial Review reported data from Woolworths’ Everyday Rewards customer loyalty program was used to help trace thousands of shoppers who visited the retailer’s BWS liquor store and neighbouring supermarket in Berala, Sydney, at the same time COVID-positive customers and staff were there in December.