A charge of salt petre will fix ferals

by an unhappy NSW chicken grower

Rabid and brainwashed animal activists have terrorised another abattoir and its staff chaining themselves to the kill floor. A mob of scruffy malcontents raided and terrorised stock at an abattoir two hours west of Brisbane last week. (see video link)

What a great opportunity the timid meatworkers have missed out on. It would have been easy to start the conveyor and give them a taste of reality while they were chained to it. 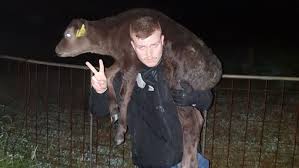 This poor deranged moron steals a calf during a farm raid

A couple of others could have had a meat hook placed through their belts and left hanging on the chains.

Others could have been given a splashing of ammonia then cleaned up with the high pressure water hoses. It would appear few of them bathe so the workers would have done them a favour. They don’t have any scruples about pouring dangerous chemicals through farm or abattoir premises causing the hospitalisation of staff.

It is time terrified farmers took a stance against the city terrorists. Why haven’t the political police charged them with terrorism offences? 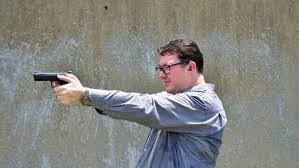 Every farm has a shotgun. Rubber pellets or salt petre are most effective in shifting feral animals. These grubs are no better. (https://www.techwalla.com/articles/how-to-make-saltpeter)

These knuckle-draggers are committing criminal trespass and breaking every biosecurity law in the book. Deliberately contaminating farms with chemicals, cutting fences, terrifying farm animals, farmers and their kids is an act of terrorism. A farm could be quarantined for years because of contamination.  At common law a farmer has every right to take defensive action when threatened.

Don’t blame primary producer bodies for not taking action. When have these National Party breeders ever done anything for a farmer? Farmers are first responders. Do it yourself.