← Clap hands for yet another LNP/ALP free trade deal this time destroying $1.75B sugar
Support David Walter in Court this Friday →

West Australian senator in exile Rodney Culleton has called on the senate President Richard Pye to call him and former senator Jacqui Lambie to appear before the senate by issuing a writ of Habeas Corpus.

Culleton has been dogged by state and federal government-initiated law suites since being forced out of the senate. When sitting in the senate he pushed for a Royal Commission into corrupt behaviour of banks and for the High Court to reinstate Queen Elizabeth 2 to legal process. 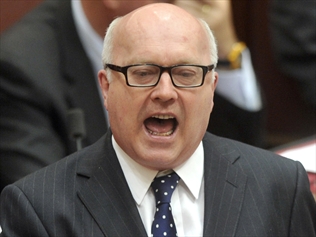 Former Attorney General George Brandis escaped to London before the effect of Culleton’s legal claims against him further embarrassed the government.

With the help of federal MP Bob Katter, he was successful with the Banking Royal Commission. In part, he got the Queen restored but he pointed out the HCA actually reinstated the fictitious Queen of Australia, which he says is not a lawful entity.

The maverick former farmer has been stymied by government in every legal move he has made to get himself reinstated to the senate.

On the evidence, there is no doubt government has called in judicial favours to knock out his appeals on every occasion, in all levels of courts.

Culleton has also called on the senate to include all other sacked senators, removed as a result of an order from the HCA sitting as the Court of Disputed Returns sought by the Turnbull Government which he says was in breach of the Commonwealth Constitution.

He has asked the senate to debate Motion 163 of 2016, which was lawfully enacted on December 1, 2016 and warned that s147.1 of the Criminal Code Act of 1995 could be invoked for failing to list the motion for further debate.

“Motion 163 of 2016 was a requirement passed by the House announcing that the referral of November 7, 2016 is faulty and that there needs to be further investigation into that faulty action, which was never passed by any procedure of law, orchestrated by former Senators Parry and  Brandis,” Mr Culleton said.

“Brandis’ motion to the House in constitutionally forming a meeting by way of a Quorum on November 7, 2016  as defined in s 22 Constitution was a failure of the tellers who counted the ‘Ayes’ and ‘Noes’ who should have noticed insufficient senators were present to take a vote.”

It is of interest that former inept senator George Brandis was whisked away to London to fill the position of Australian High Commissioner, a reward from Turnbull, the Australian Bankers Association representative in government.

Former senate President Stephen parry, a former Tasmanian police officer, has disappeared from the face of the earth after allegations of his involvement in a massive cover-up concerning the framing of alleged Port Arthur shooter, Martin Bryant, caught up to him while sitting as President.

← Clap hands for yet another LNP/ALP free trade deal this time destroying $1.75B sugar
Support David Walter in Court this Friday →