A cane harvesting contractor had to prise open the jaws of a salt water crocodile with a large spanner to remove the hand of a worker who attempted to move the 1.4 metre reptile from a cane paddock.

The attack occurred Sunday at a Peters Road farm, three kilometres from the Mareeba CBD when company work place safety officer Daryl Bell was called by a harvesting machine operator to capture the croc and tape its jaws before removing it.

The injured animal “latched onto my hand puncturing my thumb and fingers and it would not let go,” Mr Bell said.

A saltwater crocodile had its jaws prised open with a spanner after it latched onto cane worker Daryl Bell’s hand(left) in a sugar cane paddock near Mareeba. Harvesting contractor Bruce Craven is standing next to the irrigation channel in which several crocs had been seen

“The operator grabbed the tail and I grabbed the jaws but its skin started to peel off, I lost my grip and it grabbed my hand.

“Its teeth went right through my thumb nail and a finger.

“I felt sorry for the croc because it had been burnt and I had no intention of hurting it.”

Mr Bell was taken to Mareeba Hospital to get treatment and was released after his hand had been bandaged and treated to prevent infection.

Threats of prosecution made by Environment and Heritage Protection officers to local farmers should they interfere with crocodiles, led Mr Craven to contact the department in Cairns for advice about the injured reptile.

He said it took more than two hours to get an officer on the phone.

“They told us to take it to a vet who then euthanized it,” he said.

Cane worker Daryl Bell had to get hospital treatment after a 1.4 metre crocodile bit and punctured his thumb and finger

Mr Craven said the croc had been burnt the previous day in a cane fire and was not discovered until the machine operator saw it while he was harvesting standing cane.

“Having crocodiles in a cane paddock places my men in a dangerous situation and this croc should not have been in the cane.

“They are not supposed to be on the Tablelands,” Mr Craven said.

“Children ride bikes along this road next to the irrigation channel where the crocs live.

“The EHP has been contacted in the past about removing crocs from this area but they refuse to do anything about the danger.” 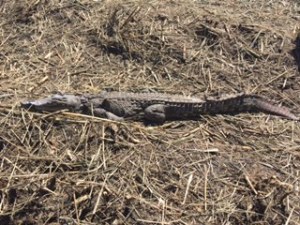 Julatten cane harvesting contractor Gordon Rasmussen, the Katters Australian Party candidate for Cook, was at the scene and was critical of the State Government for “dragging its feet”, trying to prevent the KAP’s ‘Safe Waterways’ legislation from being introduced into Parliament before the upcoming election.

“Shane Knuth (Member for Dalrymple) has the bill ready to go so we can do something about controlling the explosion of crocs in the Mareeba area and throughout the north,” Mr Rasmussen said.

“There should be no salt water crocodiles on the Tablelands and here we have a serious incident that has been reported to the Workplace Health and Safety Department by medical authorities because this was a work place accident.

“The State Government seems quite happy for farmers to be attacked by crocs and I can understand why farmers are reluctant to remove dangerous crocs because the Environment Department will chase them through the courts for a $25,000 fine.

“Mr Knuth said he will try to have the bill debated and passed in August.

“We have to do something now.”