THE Greens yesterday surpassed even their lofty benchmark for blatantly nutty policies, declaring in just one day they want to hire snipers to shoot pet dogs, double the number of firefighters to combat global warming and destroy our retirement by slugging us with massive superannuation tax increases.

And the madness doesn’t stop there. The Greens also want to give prisoners the vote — which would give mass murderers such as Ivan Milat and Martin Bryant the right to cast a vote at the ballot box at the next federal election.

Although Labor leader Bill Shorten signed a solemn pledge — drawn up by The Daily Telegraph — promising he will never do a deal with the Greens to form a government, the leader of the loony left rabble, Richard Di Natale, believes Labor will end up doing ­precisely that if it means the difference between government and opposition.. 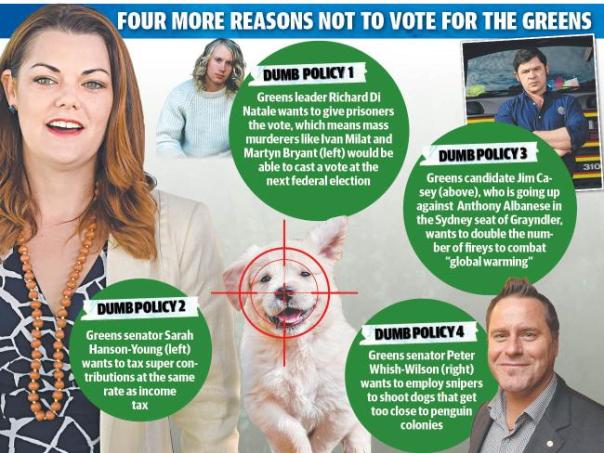 In a sign of the policies the Greens would seek to implement if it was ever given the balance of power again, Greens senator Sarah Hanson-Young yesterday threw out the spectre of ­medium- to high-income earners having to pay up to 47 per cent tax on their super contributions.

She was forced to recant from a trainwreck of an interview in which she said: “Look, we’re saying in order to make it fair you should be paying the same tax rate on income as you do for what you’re earning on your super.”

Later in the interview, she attempted to clarify her position, saying: “I’ve had a text from my chief of staff sitting ­outside, sending me the table.

“It’s basically as I was saying. A ­progressive tax rate.”

The Greens then released the policy, which showed that it did indeed want the progressive income tax scale ­applied to super — but with a top tax band of 32 per cent on those earning more than $150,000.

Potential Greens voters were then given an even bigger shock when Tasmanian Greens senator Peter Whish-Wilson called for snipers to shoot dogs that get too close to penguin colonies.

And controversial Greens candidate for the Sydney seat of Grayndler Jim Casey then suggested Australia could help combat climate change by ­doubling the number of firefighters.

Mr Casey, who is himself a firefighter, announced the Greens would spend $120 million over four years to double the number of fireys because, he said, global warming will cause “more frequent, catastrophic bushfires”.

“Global warming is already driving devastating and sometimes fatal bushfires across Australia. We must act now to save lives from increasing bushfires in a warming world,” Mr Casey said.

He appeared to claim bushfires were a result of global warming rather than arsonists and lightning strikes.

“Bushfires (are) intensifying ­dramatically due to global warming. We must boost numbers of paid firefighters to share the workload,” he said.

Greens leader Richard “Spock” Di Natale wants to give prisoners the vote, which means mass murderers like Ivan Milat and Martyn Bryant would be able to affect the outcome of the next federal election

Greens candidate Jim Casey who is going up against Labor’s Anthony Albanese in the inner Sydney seat of Grayndler, wants to double the number of fireys to combat “global warming”

Party faithful Green lemmings will continue following their leaders over the cliff into oblivion with best wishes from all logical voters.

A tidal wave of voter awareness will swamp the polls on July 2 in spite of LNP and ALP spin doctors demonising Jackie Lambie, Bob Katter, Andrew Wilkie and Nick Xenophon, who actually represent their constituents contrary to government and opposition politicians.

Social media is swimming with discontent ranging from the invasion of our cities by Islam to free trade agreements signing away our sovereignty.

With this election presenting an unprecedented challenge to the establishment elite, we will assist you to remove the LNP, ALP, Greens, power base by publishing a “how to vote card” over the next few days.