from our Cairns correspondent

Aboriginal artist extraordinaire Ann-Marie Keating has brightened up a wall of the departure room at Mareeba airport with a story-time mural she completed on Friday after many weeks of work.

The murals were sponsored by Mareeba Shire Council and a Regional Arts Development Fund grant.

Marie is a Koko-Muluridji traditional owner for Mareeba whose remarkable talent to record the town’s early history is well known after she and capable local artist Tom Cosic etched the district’s early beginnings onto the walls of the IGA arcade. It won the industry ASGA gold award for best wall mural in 2016.

In keeping with the history of the airstrip during WW2, Tom Cosic, has depicted two famous aircraft on another wall of the fledgling aviation museum.

Over two weeks he created an American B17 bomber so lifelike it could cause an admirer to duck when facing the .50 calibre cannons poking out of the plane’s turrets. 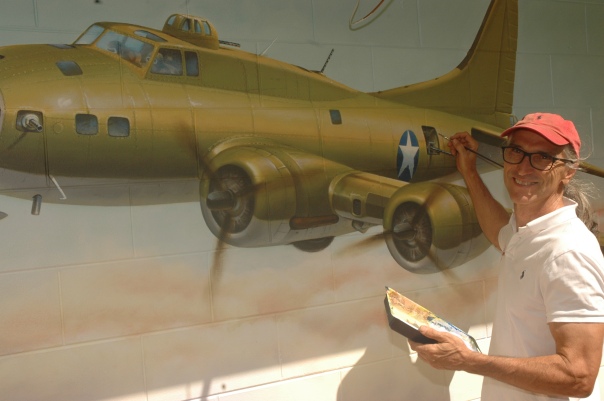 Beside the Flying Fortress which was based at Mareeba during WW2 he reproduced an outstanding image of an Australian built Boomerang fighter plane also stationed at Mareeba from 1943.

Tom’s outstanding ability in painting murals helped him win another gold award at the 2017 Rotarua Mural Symposium in New Zealand.

The ‘natural calendar of seasons’ story time which was handed down through Marie’s people has been beautifully depicted, describing how different migratory birds brought with them a change of seasons, between the wet and dry.

“When our wet season ends first come the black cockatoos which are running away from the rain in Papua New Guinea, then mutton birds, magpie geese, galahs and corellas all following the food sources”.

The colourful mural is intricately woven with wattle leaves and its myriad yellow flowers that fall into watercourses then get washed down to the ocean. Marie says local tribes have been handed down this lore for centuries, relating how natural runoff from the hinterland triggers coral spawning on the reef.

“This is when local tribes walked to the coast down the ancient track that (today) Quaids Road follows, to harvest turtles, dugong and fish arriving to feed on spawning coral”, she said.

Marie said her daughters, Gullara and Jillahkull each had a hand in creating the story-time mural which she dedicated to the late Elder Mervyn Riley.

FNQ Aviation Museum spokesman Brendan Kent said the murals enhanced the aviation exhibits in waiting room which has been converted into a temporary mini-museum but bigger things were planned for a much larger site to establish a permanent attraction.

He said the group was in the process of leasing a large block from the council in a part of the airport development.

“We have big plans for a static display complete with a Boomerang attack fighter, a DC3 and a Tiger Moth.

“We want to exhibit how aviation has played a big part in the history of the Far North and would appreciate any help we can get from the community,” Mr Kent said