The Glugs of Gosh

(Sir Stodge was ‘free trade’ advocate aka Sir George Reid who had a suburb in Canberra named after him.)

“…………But a Glug stood up with a cast in his eye,
And he said, “Far too many baubles we buy;
With all the Gosh factories closing their doors,
And importers’ warehouses lining our shores.”
But the Glugs cried, “Down with such meddlesome fools!
What did our grandpas lay down in their rules?” 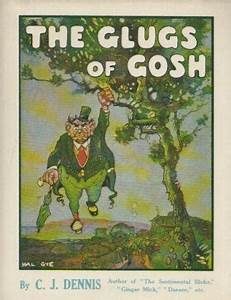 And the Knight, Sir Stodge, he opened his Book:
“To Cheapness,” he said, “was the road they took.”
Then every Glug who was not too fat
Turned seventeen handsprings, and jumped on his hat.
They fined the Glug with the cast in his eye
For looking both ways–which he did not deny–
And for having no visible precedent, which
Is a crime in the poor and a fault in the rich.

So the Glugs continued, with greed and glee,
To buy cheap clothing, and pills, and tea;
Till every Glug in the land of Gosh
Owned three clean shirts and a fourth in the wash.
But they all grew idle, and fond of ease,
And easy to swindle, and hard to please;
And the voice of Joi was a lonely voice,
When he railed at Gosh for its foolish choice.
But the great King grinned, and the good Queen gushed,
As the goods of the Ogs were madly rushed.
And the Knight, Sir Stodge, with a wave of his hand,
Declared it a happy and prosperous land…………..”