Canberra breeds many white elephants, but now they are breeding a gigantic new breed of pachyderm in Australia’s Snowy Mountains – a Green Elephant. Grandly named “Snowy 2.0 Hydro-Electric”, it has the compulsory green skin, but it is just another big white elephant under a thick layer of green paint.

Snowy 2.0 plans a hugely expensive complex of dams, tunnels, pumps, pipes, generators, roads and powerlines. Water will be pumped up-hill using grid power in times of low demand, and then released when needed to recover some of that energy. To call it “hydro-electric” is a fraud – it will not store one extra litre of water and will be a net consumer of electric power. It is a giant electric storage battery to be recharged using grid power.

This is just the next episode in an expensive and impossible green dream to run Australian cities and industries, plus a growing electric vehicle fleet, on intermittent wind and solar energy and without coal, gas, oil or nuclear fuels.

Surely we can learn from the unfolding disaster of a similar German Grand Plan:
https://carbon-sense.com/2018/08/29/german-plan-to-abolish-carbon-fuels-fails/ 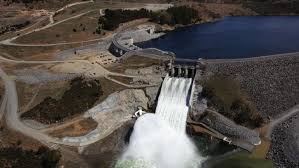 The Liberal’s Snowy River 2.0 version white elephant which former PM Turnbull reckons will be built is a legacy to his (STUPID) green renewable power ideology.

The first stage of Australia’s green dream was to demonise coal and nuclear power, set onerous green energy and CO2 emissions targets, subsidise and mandate the use of intermittent energy from wind and solar, and give electric cars financial and other privileges. All of this costs Australian electricity users and tax payers at least $5 billion per year. This destructive force-feeding of solar and wind power is well advanced.

Solar energy peaks around mid-day, falls to zero from dusk to dawn and is much reduced by clouds, dust and smoke. Over a year it may produce about 16% of name-plate capacity. Thus a solar-battery system would need installed solar capacity of six times the demand. These solar “farms” are very land-hungry per unit of usable energy, often sterilising large areas of agricultural land.

Wind energy is much more erratic – it can produce about 35% of peak capacity but often produces peak power during the night when there is low demand. It may produce zero power for several days. A sudden high wind can send wind power surging onto the grid, and it falls to zero as the wind dies.

Wind power driving a wind-battery system would need installed wind capacity of triple the expected demand, but even that may not cope with a long windless spell. There can be days with zero production from either wind or solar, and neither can increase output to meet demand which often peaks around dinner time and breakfast time when green power is scarce. Wind “farms” are a blight on the landscape and are often built in scenic areas where farming and forestry are prohibited.

The price of electricity fluctuates wildly as these floods and droughts of intermittent green energy surge into the grid. This creates instability, increases the chance of blackouts and destroys the viability of reliable coal-fired generators which are unable to ramp up fast enough to profit from soaring power prices during green energy droughts and are forced to keep running while accepting close-to-zero prices during the green deluges.

To speed up this destruction of reliable energy, politicians are still using subsidies and targets to encourage more green energy to be dumped randomly onto the grid.

For a short very clear video on the cost and reliability problems caused by wind power in Minnesota see:

Warren Buffett puts it bluntly:
“We get a tax credit if we build a lot of wind farms.
That’s the only reason to build them.
They don’t make sense without the tax credit.”

The solution to green energy disruption is simple. Do not allow any new spasmodic generators like wind and solar to connect direct to the grid. They must construct or contract for battery or other backup to moderate their fluctuations and increase reliability and predictability. Existing wind-solar farms already connected to the grid should lose all subsidies and be paid what their second class product is worth at the time it floods onto the grid.

Backing up and taming green energy is simple in principle – it can be done using lithium batteries like the Musk monster in South Australia, or giant pumped-hydro schemes like Snowy 2.0. Or conventional reliable generators like hydro, gas, oil, coal or nuclear can be operated intermittently to fill green energy gaps.

Other ways to store and release energy would also work in principle – hydrogen generation, molten salt, compressed air or giant flywheels – all look smart when sketched on the doodle pads of green politicians and then modelled on academic computers. But they become progressively more complicated and expensive as they progress to engineering design, costing, construction, operation and maintenance. Reality will reappear when the bills start hitting consumers and tax payers, but by then it is too late to recover all those wasted resources.

To make things worse for consumers and industry, widely scattered green energy installations usually need new roads for construction and maintenance and new transmission lines to transport their unreliable product to where it can be used (some 30 new transmission lines are currently planned in Australia alone to connect green energy facilities, and more will be needed.) Those who profit from this green infrastructure get guaranteed returns based on capital, maintenance and operating costs, not on the value of its contribution to consumers, and as usual consumers and taxpayers pay the bills.

Industry and households are now waking up to the costs and blackout risks facing them as more coal-fired generators are forced to close as evermore intermittent generators de-stabilise the grid and cause wild price swings. But politicians have yet another plan to paper over the growing supply problems from un-reliables as they try to meet the self-imposed emissions targets.

Recently the Turnbull Federal Government committed over $7 billion in studies and purchase price to buy the existing Hydro-electric complex in the Snowy Mountains from state governments. This valuable project conserves water which is used for irrigation and electricity generation. However they plan to burden this useful profitable project with another green dream – a Giant Battery.

Snowy 2.0 will consume electricity mainly from distant generators in the Hunter and Latrobe Valleys to pump water from lower dams to upper dams, and then recover part of this energy by releasing the stored water back downhill to drive turbines. The electricity recovered will be sent mainly to the big but distant demand centres of Sydney and Melbourne thus incurring more transmission losses. All of these unavoidable losses mean that Snowy 2.0 will only recover about 60% of the energy it takes from the grid. (This low recovery is one reason that existing pumped hydro facilities like Tumut 3 in the Snowy and Wivenhoe in Queensland are seldom used).

The system also imprisons Snowy water which could be used to generate new power and then flow into Snowy irrigation schemes. This Canberra-bred green elephant aims to profit from fluctuating wind-solar supply and prices, but it will make things worse for electricity consumers in the long run by helping to destroy low-cost, reliable base-load energy from coal.

Electricity supply will then become a lottery – every time the wind drops, the panels are shaded and the Giant Battery is flat, the lights will go out. South Australia has shown us how easy this is.

If there is also a long drought affecting hydro-electric supply in the Snowy and Tasmania, base load electricity supply will rely on a few geriatric coal generators. If a major transmission line is then damaged or fails, we will all need all the diesels in the shed. Tasmania has provided a lesson for us all – they had a hydro drought and then a broken transmission cable and were forced to hurriedly purchase 200MW of diesel engines at a cost of $64M to keep their lights on.

Snowy 2.0 will be the biggest and most expensive storage battery in Australia with some 2,700 times the capacity of South Australia’s lithium Green Elephant. It will probably require upgrading of the transmissions lines to the big demand centres of Sydney and Melbourne and to the remaining real power stations which will supply most of the electricity to run its pumps.

All of this is supposedly being constructed to help Australia meet its costly but self-imposed emissions target. However there will probably be an increase in emissions if this Green Elephant is created. The project will require a huge amount of concrete, steel, copper, diesel and electricity to manufacture, transport and install the pipes, pumps, generators, roads and transmission lines and to bore 27 km of new tunnels. Pumping all that water up-hill regularly and repairing and maintaining the system in the coldest place in Australia will not be cheap in dollars, energy or emissions. Careful accounting of all long term effects will probably show no emissions savings whatsoever.

Snowy 2.0 is being constructed to moderate the fluctuations in green energy production and to kill coal power faster. It will do this. But will not be able to guarantee electricity supply with any certainty – if we have a week of windless cloudy weather, and there is not enough coal or gas power, the demand for electricity will quickly drain the Snowy 2.0 reservoirs. Then where does the power come from to pump the Snowy water back up the hill and keep the lights on? SA’s giant lithium battery may keep Adelaide powered for a few minutes, but what about Townsville, Toowoomba and Tamworth?

However, if politicians are determined to build Snowy 2-0, it could be put to much better use than pumping water uphill to run down again. Our electricity would be more secure and cheaper if we ceased all force-feeding of wind-solar un-reliables, used coal, gas or nuclear power running continuously at capacity to supply the stable “base load” of electricity demand, and used schemes like Snowy 2.0 to cover peak load fluctuations above this base load.

This would create a stable grid providing reliable low-cost power (so it has little chance of happening with green gremlins in charge of energy.)