Burke Development Rd unsafe and should be closed

The dangerous state of the Burke Development Road west of Chillagoe in Far North Queensland has prompted calls from local truck drivers to close the road until it can be repaired.

In the past week there have been two motor vehicle accidents, one a roll over resulting in serious injuries requiring the Cairns rescue chopper to evacuate the victims to hospital. 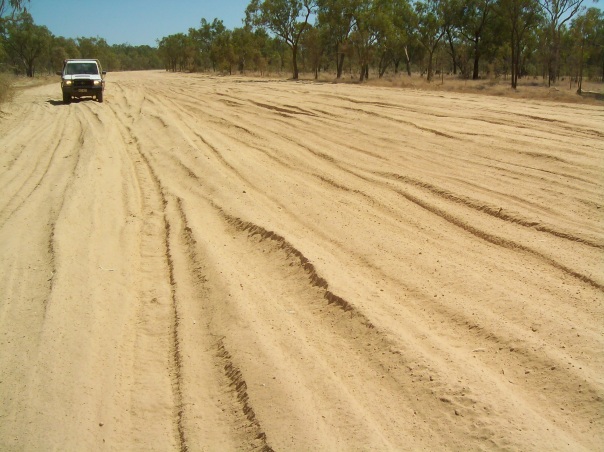 Local truck drivers are warning tourists not to venture west of the Lynd River on the Burke Development Road because of kilometre long stretches of almost bottomless bulldust across the entire road width and now churned up side tracks across claypans have all but shut down access to Kowanyama.

The Transport and Main Roads Department in Cairns and Member for Leichardt Warren Entsch were notified three days ago about  the dangerous condition of a 40 klm section of the main arterial road to Kowanyama and Normanton yet no action has been taken.

Mareeba Shire Council says it has no funds to upgrade the road, however a maintenance crew was working on the Wrotham Park end of the road and heading west.

NO ACTION TAKEN BY TRANSPORT AND MAIN ROADS DEPT OR MEMBER FOR LEICHARDT, WARREN ENTSCH

Katters Australian Party Member for Leichardt Dan McCarthy said he had driven on the road several times in the past and it had always been in need of repair.

“This road is disgraceful and trucks are getting wrecked trying to drive over it. I know of a transport operator at Dimbulah who refuses to use it. I have been advised the side tracks through the bush are now getting cut up and it really is unsafe to use,” Mr McCarthy said.

“Like the gravel sections of the Peninsula Development Road, the TMR just refuses to fix it. I will be ensuring federal money is forthcoming to have a major upgrade so the Kowanyama people and locals can use it.”

Triple road trains carrying gravel to Kowanyama from a local quarry over the past month have destroyed the soft clay loam road surface.

Chillagoe transport operator Karyl Struber said the road should be closed until it is repaired, but the deep dust holes were beyond a grader and water truck. She said it would need major works before reopening.

“It is disgusting and not safe. It is not right and little money ever gets spent on it,” Ms Struber said.

“Tourist buses and people from Kowanyama use this road and if a bus load of kids had an accident there would be big trouble.” –contributed